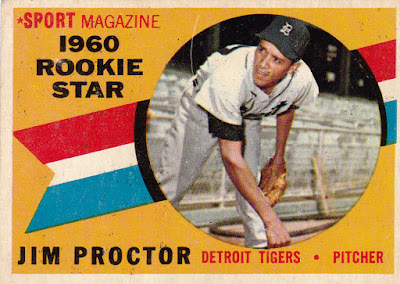 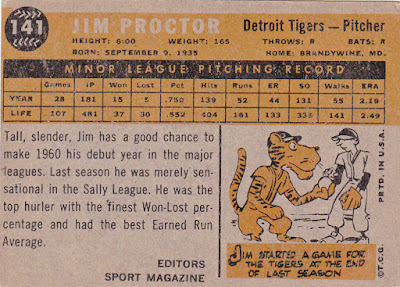 Career: Proctor, who played briefly for the Negro League Indianapolis Clowns, was supposed to be the player to integrate the Tigers' big league roster in 1958, but he was derailed by arm problems and a military stint. He'd begun his pro career with a short stay in West Palm Beach in the D level Florida State League in 1955. He was lucky to have caught the eye of the Tigers and pitched extremely well in their system.

Proctor got a September call-up in 1959 and had two appearances. One was a start in which he was knocked out in the second inning and was tagged with the loss. He never pitched in the majors after that short look. He was out of the game after another few seasons in the minors.

In 1960: He pitched for Victoria, the Tigers' AA team, a few hours down the Texas coast from me. He won 15 games but his overall stats, while good, were not as showy as they had been before his arm woes occurred.

Off The Charts: There isn't much info available about Jim Proctor. I did find a mention of him in interviews with his West Palm teammate, Gil Black. Black mentions being released in this article in the Stamford (CT) Advocate:


Due to the strong segregation laws that existed at that time in Florida, it was extremely difficult while on the road to find hotels and restaurants that would accommodate blacks.
This became so much of an inconvenience to the team that after just a few games, "myself and fellow player Jim Proctor, who was also black, were released," said Black

Black was a bit more descriptive of their treatment in this story in the same paper, a year later:

Black and the other black player on the team, Jim Proctor, led separate lives in a sense from their teammates, because they had to stay in different hotels.
One day, the manager said, "You black guys are too much trouble," and sent them home.