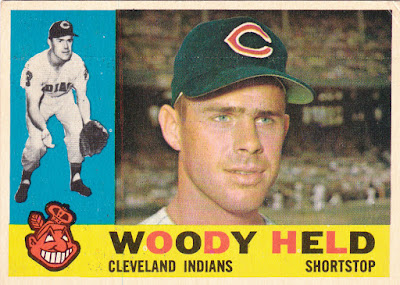 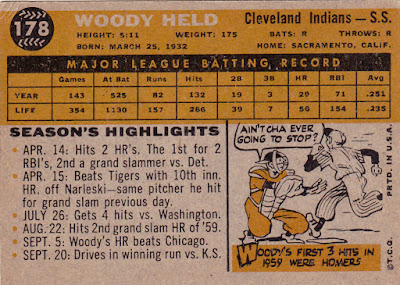 Career: Woody (aka Woodie) Held played fourteen years as a versatile and dependable infielder/outfielder. He spent half his career with Cleveland and split the rest among six other AL clubs. He never hit for average, and he had a tendency to strike out, but he had power and a locker full of gloves that made him a valuable guy to have around. Held had a high of 29 homers for the Indians in '59 during a run of seasons when he was an everyday member of their infield.

Held got a ring with the '66 Orioles although he didn't appear in the Series. His career had started with the Yankees, and he first saw the majors in 1954, He was dealt off to the Athletics as part of a package of players in June 1957.

The deal was sparked by the infamous Copacabana brawl involving several Yankees, chiefly Mickey Mantle, Hank Bauer, and Billy Martin. Yankee brass blamed Martin for the whole thing and wanted to get rid of him. Held just happened to be a convenient throw-in to balance it all out. A year later he was traded to Cleveland in the Roger Maris deal and that's where Held got his career on track.

In 1960: Held was leading the Indians in homers and RBI when he broke a finger in July. He missed six weeks of the season. He finished with 21 dingers and it's possible he would have come close to his career-high of 29 had he played the whole year.

Off The Charts: Held was in the Yankees farm system for six and a half years before getting traded to KC. He lived on his Wyoming ranch after his playing days and passed away in 2009.

The Card(s):  Topps insisted on using 'Woody' on his cards although 'Woodie' was how he signed autographs. Scrolling through the Trading Card Database shows a mixed bag on paper items through the 50s and 60s. Topps actually switched to '-ie' in 1961 and then reverted to calling him 'Woody' until he got '-ie' on his last card in 1969.