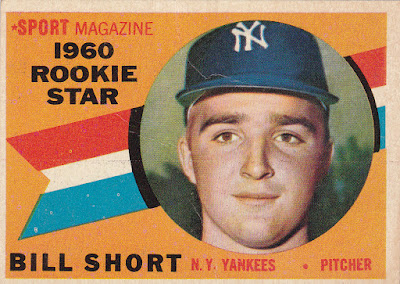 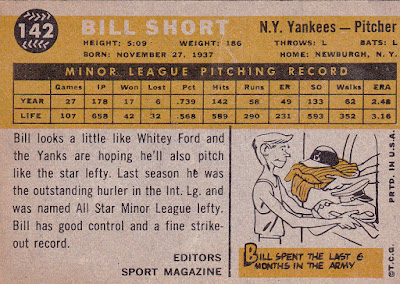 Career: Six seasons, six teams. Short took a long time to make his way up through the Yankees system. He signed in 1955 and debuted out of Spring Training in 1960. His first game was a win over the Orioles as he went seven innings in a 3-2 win. He dodged a few bullets by allowing five hits and walking six. But a debut win is a debut win.

He was back in the minors in 1961 and was taken by the Orioles in the Rule 5 Draft and pitched for them in 1962 and 1966. In between, he was banging around the Orioles chain. He was traded to the Red Sox in August 1966 and missed out on a shot at pitching in the Series.

From there it was a tour of the NL with stops in Pittsburgh, back in NYC with the Mets, and finally with the Reds in 1969.  His career mark was 5 wins and 11 losses.

In 1960: Game logs for 1960 indicate that he came and went between the Yanks and AAA all season. He was with the team through May but after that he was he got the call to make spot starts and had decent enough results. He took a tough 2-1 loss to the Orioles the week after his debut but his problem was as before: six walks. He finished 3-5 with an ERA of 4.79 in 47 innings.

Short was much better with Richmond. His work there was curtailed a bit by elbow issues, but he had a fine stat line.

Off The Charts: Hard to pin down exactly how this timeline falls, but on his SABR page we find this: Short wrote, “Paul Krichell, scout of the Yankees, signed me after I finished high school, but before I signed I had to go to Watertown, N.Y. to play a year of semi-pro.” That's Night Owl's hometown.

The Card: Love the first line of the write-up on the back...'Bill looks a little like Whitey Ford...'. Really? Then I look a little like Elston Howard.

Seriously, this is another "I remember this card" card. In 1960 I was just branching out from under my Dad's 'umbrella' and finding my own teams. But I was, well, not a 'fan' exactly, but a Yankee 'follower' since they were all over every sports page, and we got three newspapers and listened to Stan Lomax every night before dinner. It was hard NOT to know everything about them. Not to mention that getting a Yankee on a card was a big deal among the couple of friends I had in the year or two we lived on Long Island.