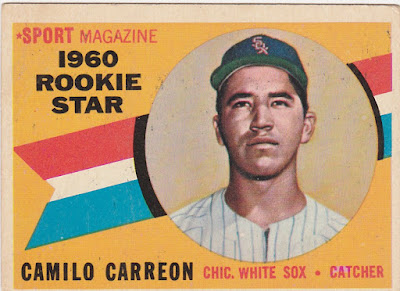 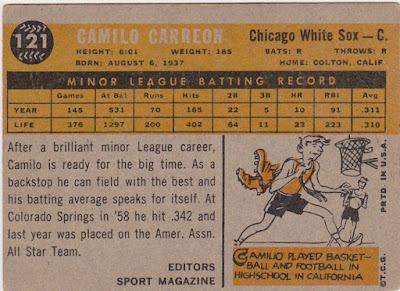 Career: After a solid minor league run Carreon made the Sox club in 1961 as their reserve catcher. He was the nominal starter in 1962, playing ahead of Sherm Lollar that year and J. C. Martin the next. He was a reserve in '63 and then was shipped off to Cleveland in a three team deal (K.C. was the thrid party) that saw name players Rocky Colivito, Tommy John and Tommy Agee switching clubs. He saw his last major league action during a brief stint with the '66 Orioles. Following more minor league play he did some coaching in Arizona and groomed his son Mark for a big league career.

In 1960: Despite the Topps 'back of the card' hype Carreon wasn't quite ready for the bigs in 1960. He spent the year with San Diego, the Sox' AAA club and got a September call-up. He appeared in eight games for Chicago.


Camilo Carreon's devotion to his children helped turn out a handful of adults that any parent would be proud of and who also revered their father for his guidance. His involvement with his friends and the baseball community in Tucson evoked many similar feelings. After a battle with cancer, Carreon died on September 2, 1987, at the age of 50. Six days later Mark made his debut in the major leagues as a September call-up of the Mets. On that day he pinch-hit for Sid Fernandez in the third inning and hit into a fielder’s choice. Memorial services for Cam were well-attended both in Tucson and in Colton [California, his hometown], where he is buried. Later, a memorial was dedicated in his honor at the El Rio Golf Course in Tucson, where he spent many afternoons with his closest friends. In 2006, Carreon was posthumously elected to the Colton Hall of Fame, the first Hispanic so honored. His family was present for the induction.


The Card: A point penalty for the rather washed out colors and off-centeredness of this one. Big bonus points for the nostalgic value these orange-y rookie star cards bring me. I remember how cool I thought they were as a kid. I wonder if the Sport Magazine editors really wrote the card back blurbs?

The cartoon references Carreon's days as a schoolboy hoops star. It doesn't look like a Jack Davis cartoon but Davis did one for Carreon's '62 card and it too was a basketball piece. I found it in the archives of an auction house. Boy would I love an original Jack Davis. 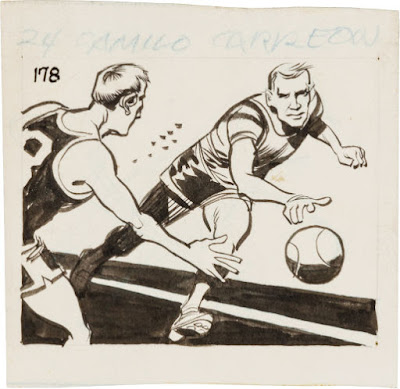