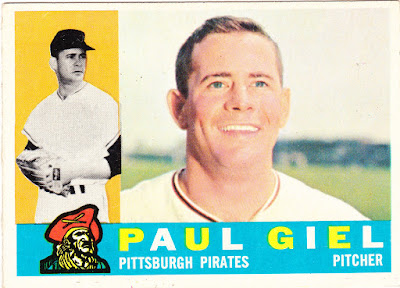 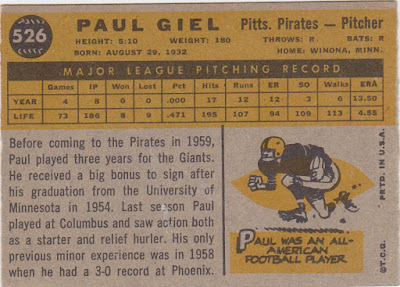 Career: Paul Giel was a 'bonus baby' signee of the Giants after college and spent two years with the big club as per the rules at that time. Then after a two year military stint he returned to the Giants before being dealt to the Pirates in 1959. He pitched for the Twins and A's as well and retired after the 1961 season. His career record was 11-9 in 102 appearances, 11 of them starts.

In 1960: Giel pitched in 16 games for the Pirates, four per month thru July, all in relief. His ERA was over 5 and he had no decisions. He spent the rest of the season at Salt Lake City, the Pirates' AAA farm club.

WikiFacts: From his BR Bullpen Page:


"A better football player than a pitcher, halfback Paul Giel was runner-up to Johnny Lattner for the 1953 Heisman Trophy. He was a two-time All-American at the University of Minnesota and is a member of the College Football Hall of Fame."


And from his New York Times obit:


Giel signed with the Giants for a $60,000 bonus, their highest ever at the time. He had a strong fastball, a good slider and an ordinary curveball and needed minor league seasoning, but the rules at the time required such so-called bonus babies to spend at least their first two years in the major leagues.

He had mixed feelings about that, telling The Daily Mirror: ''I don't only want to sit around, just hoping. I want to play. I want to belong.''

He seldom played -- Giel appeared in 30 games in his first two seasons -- but he was excited anyway. A month after his major league career began, he told Arthur Daley, The New York Times columnist: ''This is wonderful. Every game's a Rose Bowl game. I still can't believe that Willie Mays is real. He just has to be a figment of someone's imagination.''

The Card: My guess is that Giel is wearing airbrushed Giants gear in both photos. Rather ordinary card with the highlight being the cartoon which references his 'former life' as a big time college football player.

Posted by Commishbob at 9:03 AM