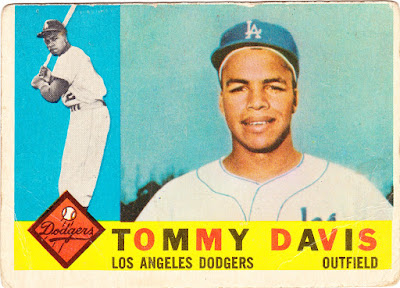 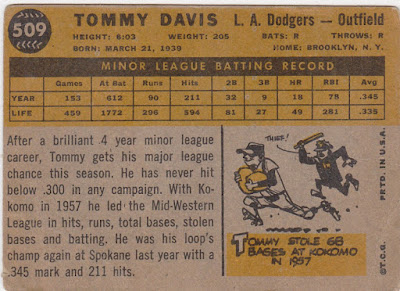 Career: 18 seasons...ten different teams. That's the resume of a 'bat for hire'. Davis played in Los Angeles for just under half his career and had his best seasons there. He was a two time All Star and three times he finished in the top ten in MVP balloting. He won back-to-back hitting titles with the Dodgers in 1962/63 and led the NL in hits and RBI in 1962. Although he was briefly on the Dodgers in 1959 he was not involved in their World series win. He won his ring with them in 1963 batting .400 in the sweep of the Yankees.


.....my next question was, “Did you sign with the Dodgers when they were still in Brooklyn?” And just like that, the subject of this article became Tommy Davis.
“Yes,” Davis said. “I’m from Brooklyn. I was signed in ‘56. I was going to go to the Yankees because they gave me a lot of attention. They let me work out with them five or six times while I was in high school. That was overwhelming–Mickey Mantle, Yogi Berra, Elston Howard, and Whitey Ford were there–that’s a lot for a 17-year-old.
“Al Campanis was the general manager of the Dodgers and he came over and let my family know that the Dodgers were interested in me. And then he found out that I was going to sign with the Yankees on a Tuesday night and he had Jackie Robinson call me the Sunday before that Tuesday. And I said, ‘Mom, Mom, that was Jackie Robinson on the phone!’ I signed Tuesday afternoon with the Dodgers.”

The Card: I 'cheaped out' on this card. It proved to be difficult to find in decent shape at a price I was willing to pay. It's a high number and it's Davis' rookie card so I knew it would cost a bit more than most of the rest of the cards but I wasn't expecting it to be so difficult. But the card itself is pretty nice. The color combo works for a Dodger and while it's a portrait it's not another close-up. Plus, you have to like the cartoon.

Posted by Commishbob at 6:27 PM