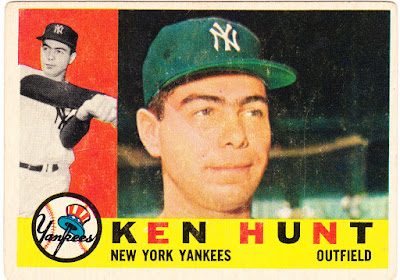 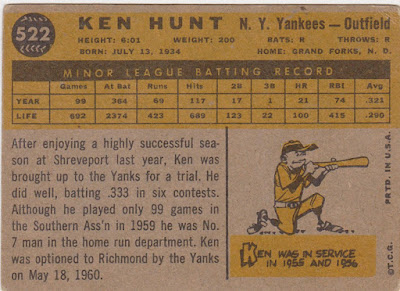 Career: Ken Hunt spent seven seasons fighting his way up the Yankee chain and got to play with the big club in '59 and '60 before being selected by the Angels in the expansion draft. He was a full time outfielder in L.A. in 1961 and had a pretty good year with 25 homers and 84 RBI. He played in the majors through 1964 with the Angels and Senators. After that '61 season he never again was a regular starter. A serious shoulder injury and his below average fielding abilities contributed to that fact.

In 1960: He began the year with the Yanks and saw more action in September but the bulk of his time was at AAA Richmond where he hit .272 with 23 homers. It was his work there that likely caught the Angels' eye and prompted his being taken in the expansion draft.

WikiFacts: From his BR Bullpen page:


Ken Hunt was the stepfather of Butch Patrick, who played Eddie Munster on the classic 1960s sitcom The Munsters. He was a close friend of Roger Maris and the two are buried next to each other at Holy Cross Trinity Cemetery in North Dakota.
Hunt had a small part in one Munsters episode, "Herman the Rookie" (1965), along with Leo Durocher and former professional football player Elroy "Crazy Legs" Hirsch.


The Card: High number card that came with a 'Yankee surcharge' of an extra buck or so despite the soft corners. Pretty routine stuff here....but the color scheme is one of my favorites. Note the last line of the write-up which references his being farmed out in May of the 1960 season.