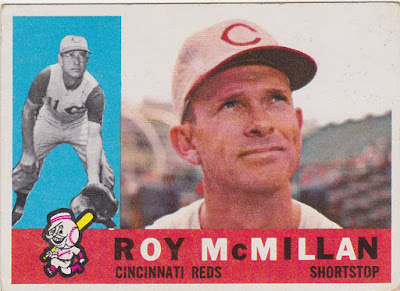 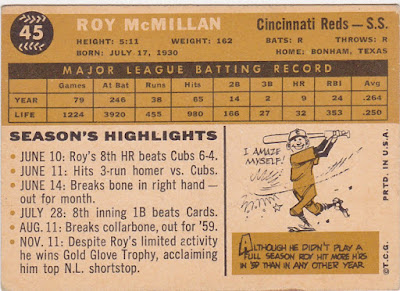 Career: He spent 16 seasons in the National League including the entire decade of the 50s with the Reds, He finished with the Braves and Mets and his numbers, never spectacular, at least held up to nearly the end of his career. He had a lifetime average of .242 and ten times finished at or near the top of the league in fielding. He won three Gold Gloves and was twice an All Star. His best full season was 1957 when he had career highs in average, OBP and slugging.

After his playing days he was a coach and in 1975 served as manager of the Mets following the dismissal of Yogi Berra. He also managed and coached in the minors for several organizations.

In 1960: This was to be his final season in Cincy before being dealt to the Braves for Joey Jay and Juan Pizzaro. He was coming of a '59 season cut short by a broken collarbone hitting .236 and had the first of two double digit home run totals of his career (he hit 10).

WikiFacts: From his Cincinnati Reds' Hall of Fame entry- Roy McMillan, the 5 foot, 11 inch, 164 pound Cincinnati Reds shortstop who's highest season batting average was .272, graced the cover of the September 9, 1957 Sports Illustrated, an honor usually reserved for athletes with names like Joe DiMaggio and Ted Williams. It was not a fluke. McMillan, in his ten years with the Reds (1951-1960), had earned the reputation of being the best defensive shortstop in the Major Leagues and the title "Mr. Shortstop." McMillan considered the SI cover "one of the top moments in his career."

Hall of Fame member, Pie Traynor said, "McMillan makes his own bounces, He's the only present-day shortstop who can do that..he can take the ball on the half hop all the time, a very tough play." Leo Durocher hailed Roy as " the best defensive shortstop in the game today." Manager Birdie Tebbets declared, " Roy McMillan is the finest defensive shortstop I've seen in the last 20 years. He's a good run-batted-in man and his hitting is continually improving."

The Card: Nice to get back to cream and gold backs and a card with bulleted highlights. Nice color combo on the front as well. McMillan poses without his glasses (that's rare) in either Wrigley Field (likely) or Seals Stadium in San Francisco (less likely).
Posted by Commishbob at 10:23 AM