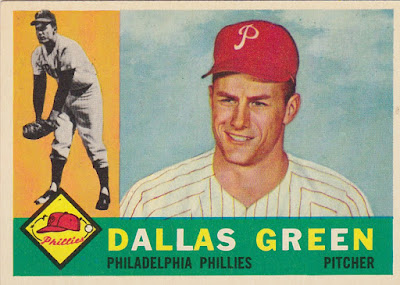 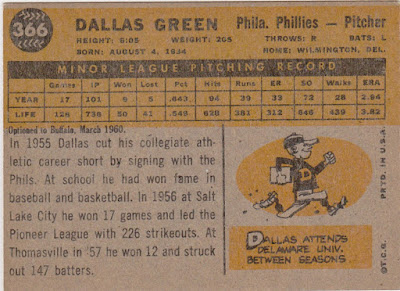 Career: Best known as a manager and front office guy but Green went 20-22 in 185 games as a pitcher. He pitched most of them with the Phils as a spot starter and reliever between 1960 and 1964. He spent the final three seasons of his active career shuttling back and forth between the Phils, their minor league system, the Nats, the Mets and back to the Phils. He won a World Series ring as manager of the Phils in 1980.

In 1960: He began the year in the minors but was recalled in June (see cardback below). He went 3-6 with a 4.06 ERA but his 1.32 WHIP was the best of any on his seasons with the Phils. This was the only year of his career that he had fewer hits allowed than innings pitched.

WikiFacts:
From Green's BR Bullpen page: "...Green became the assistant farm director for the Philadelphia Phillies from 1970 to 1972. He was the director of player development from 1973 to 1974 and Scouting Director from 1975 to 1979.

Green went on to later manage the Phillies to the World Series championship in 1980. He became General Manager of the Chicago Cubs from October 1981 to 1987. Green also managed the New York Yankees and New York Mets. Green spent the 2000s as a senior advisor to the GM of the Phillies.

From his Wikipedia entry: As a manager, Green was known for his gruff manner. "I'm a screamer, a yeller and a cusser. I never hold back", he said. He was notorious for his use of profanity.

An example of the way that Green had of speaking to the press about ballplayers was his comment about Scott Rolen in 2001: "Scotty's satisfied with being a so-so player. I think he can be greater, but his personality won't let him." Rolen would be elected to the All-Star team seven times and win eight Gold Glove Awards.

From an interview posted on MLB.com following the publication of Green's book in 2013: There isn't much the 78-year-old, now a senior advisor for the Phillies, hasn't done in the game. He's been a player and a coach. He's been a scout, farm director, general manager and team president. He managed the Phillies, Mets and Yankees, bringing the first World Series championship to Philadelphia in 1980. He did it all while routinely telling the truth as he saw it, even if others didn't always appreciate his blunt approach.

But what sets his book, written with Alan Maimon, apart are the few pages at the end when Green recounts how a national tragedy struck him in a profoundly personal way. When a gunman in Tucson, Ariz., set out to assassinate Rep. Gabrielle Giffords in January 2011, six others were killed. One of them was a 9-year-old girl named Christina-Taylor Green, Dallas' granddaughter.

While admitting that he'll never fully get over the loss, Green talks about this wrenching experience with the same unflinching honesty with which he discusses other chapters of his life. He doesn't hide the fact that hunting is one of his favorite pastimes, but he believes there should be a limit on the sorts of weapons individuals can own. He openly admits that he's angry that the shooter was ruled mentally incompetent, thus escaping the death penalty. He speaks movingly about trying to get past his understandable trauma to celebrate Christina-Taylor's life.

"I'm supposed to be a tough sucker, but I'm not very tough when it comes to this," he said.


The Card: This card is a little different than most of the others in the '60 set. It has the look of a retouched photo. And sure enough I found the original picture. Looks like Topps colorized it and perhaps enhanced or added the clouds in the background. 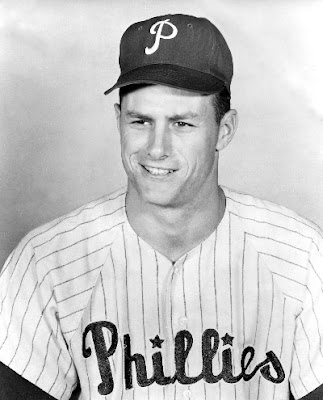 And it looks like Topps added a last minute notation to the back following Green's demotion to the minors. It's very hard to read on the card and even harder in the scan.

Posted by Commishbob at 9:33 AM