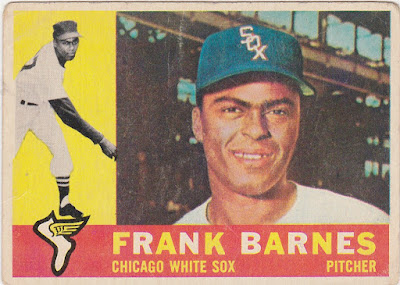 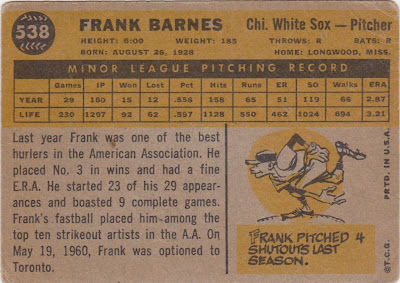 Career: Barnes began his pro career at the age of 18 with the Indianapolis Clowns. Two decades later he retired after a stretch in the Mexican League at the age of 40. Along the way he had a few looks at the bigs with the Cardinals. He was 1-3 in 15 major league games across 1957, '58 and '60. In 1958 he was used as a pinch-runner for Stan Musial following "the Man"'s 3,000th career base hit.

Baseball took him from Charleston to Seattle, from Toronto to Reynosa. All told with including his minor league, Negro league and Mexican League numbers he likely has over 200 wins in his career.

In 1960: He began the year in the minors but was called up in late April to St. Louis pitching in four scattered games. The last of those was a May 14 start in Wrigley Field in which he took the loss. The back of this card notes a May 19 option date on which Barnes was sent to Toronto. I don't think that is entirely accurate. Baseball Reference lists that date as the one on which he was purchased by the White Sox. Whatever the case actually is he never made it back to the majors after those early appearances in 1960 for the Cards.

WikiFacts: Lots of info on Barnes from various websites:


On March 9, 1958, the Cardinals started Barnes against Yankees ace Whitey Ford in the second exhibition game of the spring. Barnes pitched well, yielding a run in three innings.

In his first 15 spring training exhibition innings, Barnes gave up a total of two runs, prompting The Sporting News to describe his performance as “dazzling pitching.” Impressed, the Cardinals put Barnes on their Opening Day roster. For Barnes, two highlights of his stint with the 1958 Cardinals occurred in May. Musial delivered his 3,000th career hit, a RBI-double to left-center off the Cubs’ Moe Drabowsky, on May 13 at Chicago.

Hutchinson lifted Musial for a pinch-runner, choosing Barnes for the honor. Barnes raced home from second on a single to left by Don Blasingame, tying the score at 3-3 in a game the Cardinals would win, 5-3.

Five days later, on May 18, Barnes earned his only big-league win.
In the opener of a doubleheader against the Dodgers at St. Louis, Barnes, in relief of Mabe, pitched six innings and held the Dodgers to one run (a Johnny Roseboro home run) and four hits. The losing pitcher was future Hall of Famer Don Drysdale, who relieved starter Fred Kipp in the second and gave up two runs and five hits in four innings. Billy Muffett relieved Barnes in the ninth and earned the save in a 6-5 Cardinals victory.


From the Yes Network blog:


On July 19,1950, Pitcher Frank Barnes and OF Elston Howard were purchased by the New York Yankees from Kansas City Monarchs (Negro American League)). Both players were sent to the Yankees minor league team at Muskegon (Central League). Frank went 8-4 with 2.23 ERA in 15 games. In 1951, Frank returned to Muskegon, where he posted a 15-6 record in 15 games with a 2.23 ERA. He was promoted to AA San Francisco Seals (PCL). He appeared in only 2 games for the Seals, while posting a 0-0 record.
In August of 1951, Frank was sent from the  New York Yankees to the St. Louis Browns in an unknown transaction. Pitcher Frank Barnes and several other black Yankees minor league players (Vic Power, Ruben Gomez, Artie Wilson and others) would be traded away during the 1951-1954 seasons, once Yankees GM George Weiss had decided that Elston Howard would be the 1st black Yankees MLB player.


The Card: The original lot of 1960s I bought on eBay that got this collection off and running contained 200 cards or so. Most were in very collectible condition and most were from the middle couple of series. This Barnes is an exception. It's from the high number 7th Series and it's very much in need of an upgrade. This is his only card btw.

And I think I really will upgrade it because I like this one a lot. Neat picture of Barnes and it's the rare Topps card of the era that shows Sportsman's Park (Busch I). I found the original shot which Topps retouched to show Barnes in a Sox cap. Images below. And looking at the card again I just have the impression that the 'action' black-and-white shot is on Barnes in a Negro League uni. It's just got that 'feel'. 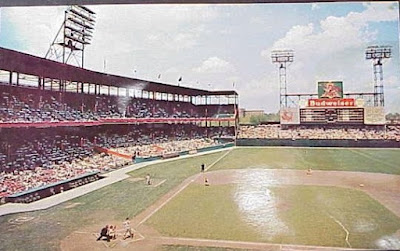 Here is the Barnes pic used on the card and a bonus shots from his days in the Negro Leagues and in the Yankee chain at Muskegon: 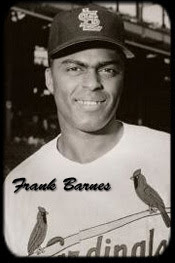 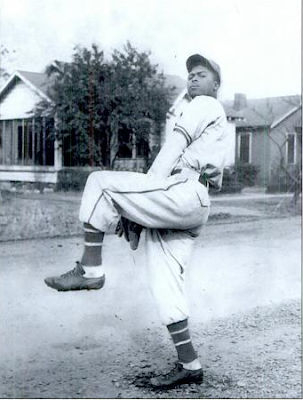 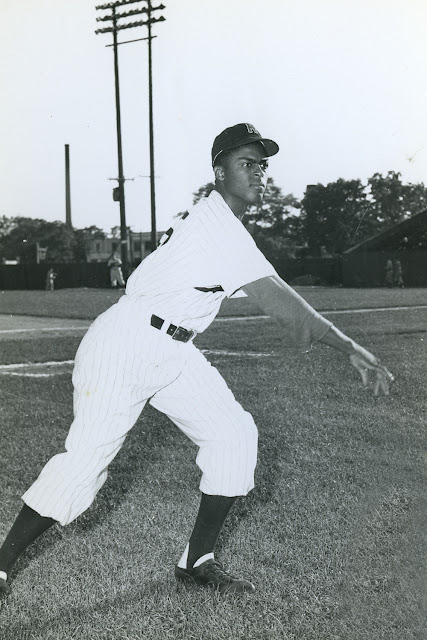 Posted by Commishbob at 9:55 PM