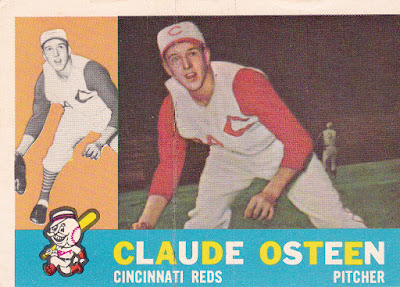 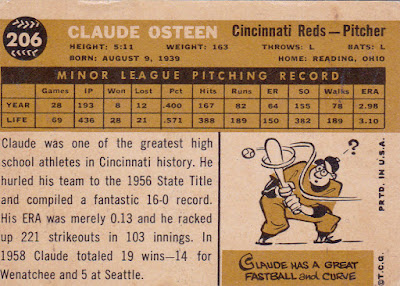 Career: Osteen took some time to get it going but once he did he was a top-notch pitcher for a run of strong Dodger clubs. He came out of his Ohio high school as a much-ballyhooed athlete and signed with the Reds in 1957 and even got into one big league game that same week as a 17-year-old. He spent several years moving up and down between the Reds and their AAA club and ran out of options after a demotion in 1961.

Rather than risk losing him to a Rule 5 claim after the season the Reds dealt him to the Senators. He found his stride in D.C. and had three solid seasons for the Nats. His stock rose to the point where they could deal him to the Dodgers for Frank Howard after a 15-win 1964.

With the Dodgers, he had nine double-digit win seasons and made three NL All-Star squads. He was in the shadows of some Dodger greats like Koufax, Drysdale, and Sutton and never got the recognition he deserved.

The Dodgers traded him to the Astros for Jimmy Wynn in December of 1973 and he wound up his career with Houston, the Cardinals, and the White Sox. He was out of baseball after 1975.

In 1960: He spent the year sitting in the Reds' bullpen because he was out of options and they couldn't risk losing him. He got into 20 games and lost his only decision in a spot start against the Giants. Overall his ERA of 5.03 wasn't indicative of what was to come.

Off The Charts: Osteen's nickname was 'Gomer' because of his resemblance to TV's Gomer Pyle as played by Jim Nabors. 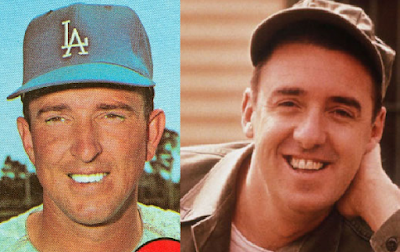 The Card: Is the same picture used here for the main shot and the b/w 'action' shot? Looks like it. Osteen's eyes are sorta/kinda not looking the same way in the two pics but the main color pic is 'Flexochromed' so the artist/retoucher can play around with those sorts of details.