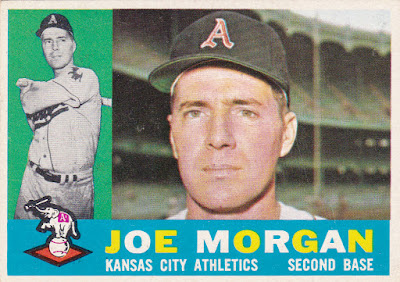 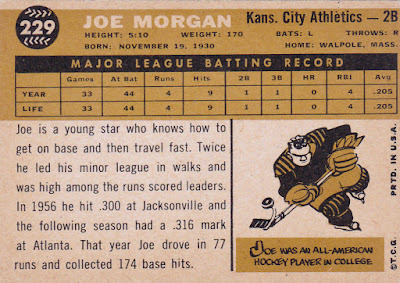 Career: Topps described Joe Morgan as a 'young star' but in the course of four rather harried seasons he played for five teams and only once had more than 50 trips to the plate. He had been signed by the Boston Braves in 1952 and, after a long climb through the minors and a military detour, he debuted with the Braves in 1959.

After an 'interesting' 1960 season (see below) he played for several years in the minors for a variety of clubs and after an absence of nearly three seasons, got a couple at-bats with the '64 Cardinals.

After managing in the Red Sox chain he was elevated to the dugout job in Fenway Park in 1988 and over four seasons he took the Sox to a pair of AL East titles. His team lost both AL title series in four games to Oakland. Morgan ended his managerial career with a 301-262 record.

In 1960: This was Morgan's busiest season (boy, was it!) as he played in 48 games and got 130 at-bats. Interestingly, he was the property of four clubs over the course of the year. And none of his at-bats came with the team he is shown with, the Athletics. In August of 1959, he had been sold to KC by the Braves. In April of 1960 the A's returned him to Milwaukee. He spent the first few months of the season with the Braves' AAA team before being traded to the Phillies for Al Dark in June. The Phils then sold his contract to Cleveland in August.


Off The Charts: Morgan coached the Pawtucket Red Sox from 1971 to 1982 and was the longest-serving manager in the club’s history. Morgan is the only manager to be inducted into the club’s Hall of Fame, an honor he earned in 2017. In his nine years at the helm, Morgan compiled a franchise-record 601 career wins and is the only person in the history of the International League to win both the league MVP and Manager of the Year awards.

And He Is Really Off The Charts: References to this Joe Morgan are buried so deep in Wikipedia behind the 'other', (Hall Of Famer) Joe Morgan, that I wasn't sure I could do much of a post. How bad is it? Well, if you go to this Morgan's Baseball-Reference page and click the link to his page at the Bullpen Wiki, you are sent to HoF Morgan's info. You have to locate the note at the top that then directs you to this Joe Morgan. Sheesh.

I was able to find that he played hockey as well as baseball at Boston College. The cartoon on the card references his exploits on the ice. Wikipedia reports that he led the Eagles in points his junior year.
Posted by Commishbob at 7:00 AM