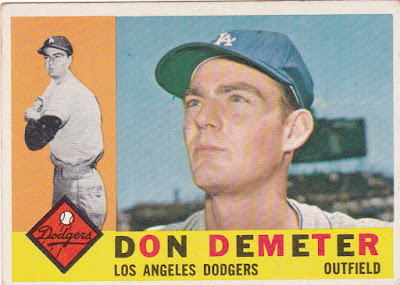 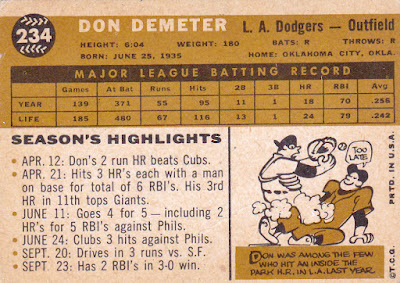 Career: As a Brooklyn Dodger signee in the early 50s Demeter, a centerfielder, drew comparisons to then Dodger star Duke Snider. He obviously didn't hit that level as a player but he had a nice eleven-year career that included a World Series ring with the '59 Dodgers.

He also played for the Phils, Tigers, Red Sox, and Indians. A modest man, Demeter says he would have liked to have been around Boston for the '67 pennant run. But he claims that the deal that sent him to the Indians that summer for Gary Bell was the pivotal piece in the Red Sox season.

Demeter, always referred to as tall and lanky (6'4 190), retired at the age of 32 saying that as much as he enjoyed baseball there were other things in life he wanted to pursue. He finished with a .265 career average and 163 homers. He received MVP votes a few times in the early 60s during his time with the Phils.

In 1960: Demeter was hitting .274 and showing new-found consistency early in July when he collided with teammate Maury Wills and fractured his wrist. That ended his season and the injury likely led to a slow start in 1961 that prompted a trade to the Phillies.

Off The Charts: Demeter, a man of great faith, founded and ministered a church in his hometown of Oklahoma City.


This great little six-minute video was made by Demeter's granddaughter a decade ago. A nice mix of highlight clips and Demeter talking about his life in the game, his family, and his faith.

Demeter and his wife lost their son, Todd, to Hodgkin’s Disease in 1996. Todd Demeter had been a second-round pick of the Yankees who had not reached the majors and was working in his father's business.
Posted by Commishbob at 7:00 AM