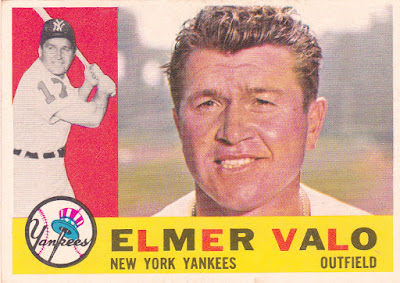 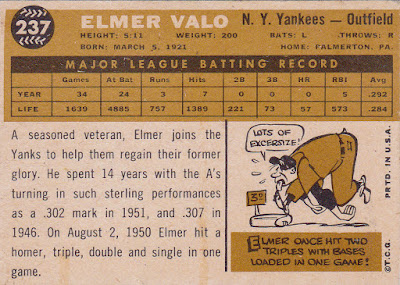 Career: Elmer Vallo was signed by the Philadelphia Athletics way back in 1939. He spent the rest of that season and most of the next two tearing up minor league pitching. He got a few moments to shine in Philly back then and he proved that major league hurlers were not that much more of a challenge than the minor leaguers he faced.

He nabbed a spot in the Athletics' outfield in 1942 and regressed some. Then Uncle Sam called him up the following year. When he returned from the military in 1946 he ran off a string of six excellent seasons. He hit nearly .300 from '46 through '52.

He continued as a semi-regular outfielder, bench piece, and pinch hitter through 1961 playing for the Athletics after their move to KC, the Indians, Dodgers, Senators/Twins, Phils, and Yankees. His career average was .282 and he went on to coach, manage (in the minors), and scout for many years after his playing days were done.

Valo played big-league ball for 20 seasons but never appeared in a post-season game.


In 1960: Elmer, who had signed as a free agent over the winter, wasn't long for Broadway. He played in eight games for the Yanks,. He went 0-for-5 as a pinch-hitter and was released on May 23rd. He signed the next day with the Senators and continued serving as a pinch hitter as he had in NY. He hit .281 in 86 plate appearances over 76 games off the bench.

Off The Charts: Valo was born in Rybník, Czechoslovakia, and emigrated to the United States with his family at the age of six. Only one other big leaguer, Jack Quinn, who pitched from 1909 to 1933 for many different clubs, is listed as being born in what is now known as Slovakia.

Wikipedia contributes this..."Valo stated that he had a plate appearance for Philadelphia on September 30, 1939. If true, Valo would join Ted Williams, Mickey Vernon, and Early Wynn as the only four-decade players of the 1930s to the 1960s. The box score for the game does not list Valo — he claimed that he was left out by the official scorer, as he was not under contract with Philadelphia at the time.
On May 1, 1949, Valo became the first major league player to hit two bases-loaded triples in a game"

The Card: Valo appears in his '59 Indians uni in the B&W shot (his cap is crudely redrawn with the Yankees' 'NY'). The main photo has the LA Memorial Coliseum in the background so it's probably from Valo's 1958 season with the newly relocated Dodgers.

You'd think Topps could fill up the text box for a guy with the long career Valo had. But they put so little there that the spacing makes it look like a random word salad.

Red/yellow/black/red/black* is the most common combo for Yankees cards in the 1960 set. It's used on 13 of them and on 23 cards total. I'm wrapping up the formatting and proofing of my Excel file with the colors for this set.

*=the colors listed cover these elements in this order:
'action photo' background
text box background
first letter of name
second letter of name (these last two form the alternating pattern)
team and position test line
Posted by Commishbob at 7:00 AM