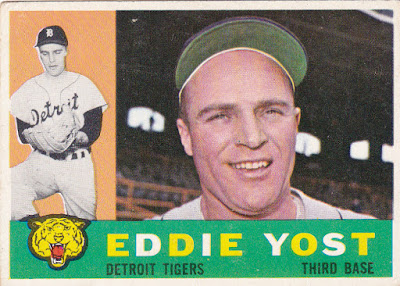 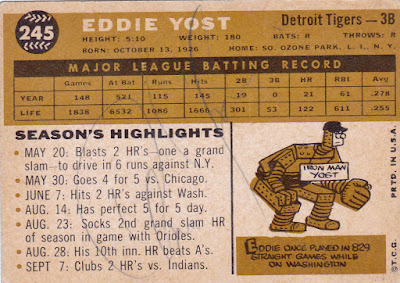 Career: Eddie Yost was known as 'The Walking Man", and for good reason. He led the AL in bases on balls six times and was in the Top 10 twelve times. The Brooklyn native signed with Washington in 1944 and debuted as a 17-year-old that year. He spent a year in the service and returned to the majors never having played a game in the minors.

Yost was an institution at third in Washington playing 14 seasons with the Senators. He made the 1952 AL All-Star team but didn't play in the game. He received some scattered MVP votes, even playing on some terrible clubs.

He was traded to the Tigers and was their starting third-baseman in 1959/60. He finished his playing career as a part-timer and player/coach with the Angels. Yost spent 23 seasons as a coach for the Senators, Mets, and Red Sox. He was on the staff of the Mets' NL title clubs in 1969 and 1973. He got his ring in '69.

In 1960: This was Yost's final season as an everyday player. He led the AL in walks (again) and in .OBP for the second straight year. He hit a respectable .260 for the Tigers. They nonetheless left him unprotected in the expansion draft and he was taken 25th by the Angels.

Off The Charts: This is from a bio of Yost on DC Baseball History blog I stumbled across:


The Boston Red Sox invited Yost to work out with the team in Boston in 1943. They liked what they saw. But when the Sox sent a scout to his Brooklyn home to sign him, they learned, from his mother, that Eddie was in St. Louis with the Washington club. Yost signed with Washington before the 1944 season. Boston Manager and former Nats shortstop Joe Cronin told Washington Post sportswriter Shirley Povich at the time, “Any right handed hitter who would sign with Washington when he had a chance to shoot for our left field fence deserves no sympathy.” But the Nats had finished 2nd in 1943. Boston finished 7th.

Yost was the first Los Angeles Angel to appear in a game when he led off in the fledgling club's opener in Baltimore on April 11, 1961.

Yost earned a Masters in Physical education at NYU during the off-seasons in the early 50s. He had played baseball and basketball there as an undergrad before he joined the Senators.

The Card: Pencil scribbles on the reverse don't bug me much. I might dig up a better one when we get back to having card shows.