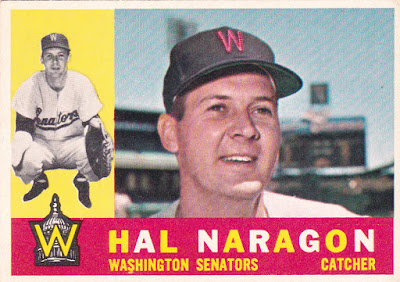 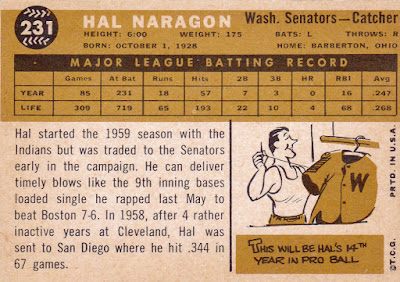 Career: Hal Naragon signed with his home state Indians in 1947 and made it to the majors in 1952. He was unique in that his numbers got better as he climbed up through the Cleveland system. He also had a two-year detour as he served with the US Marines.

Over his ten-year big league career, playing for the Indians and Senators/Twins, he was never a primary catcher. His busiest season was 1959 when he got into 85 games that bracketed a May trade to the Senators for another long-time reserve backstop, Ed Fitz Gerald.

Naragon hit a respectable .266 for his career which included playing for the 111-win '54 AL Champ Indians. He caught three Hall of Fame pitchers for that club (Wynn, Feller, and Lemon) and made a defensive appearance in Game Three of the Series that year.

He spent many years as a coach after his playing days and was on the staff of the 1965 Twins team that won the AL crown and the '68 Tigers where he earned a World Series ring that he wore proudly until his passing at the age of 90 almost exactly one year ago.

In 1960: He struggled for playing time with the Nats and was only in 33 games, the fewest of his career up to that point. His .207 average was below his career norm. Game logs for that season show some fairly big gaps between appearances so injuries may have played a part in all this.

Off The Charts: Naragon's school, Barberton (Ohio) High, recognizes star baseball players with the Hal Naragon Award and the school’s baseball field is named in his honor.