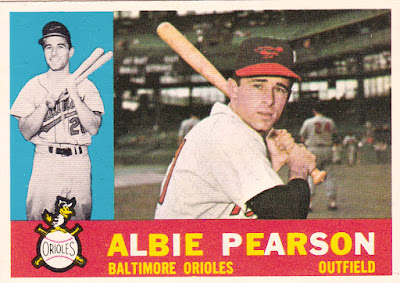 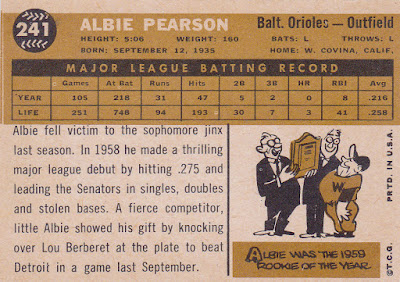 Career: Pearson, one of baseball's most interesting characters, signed with the Red Sox in 1953. He had originally signed (for a song) as a pitcher but the Class C San Jose club was short on position players and Pearson was given a spot in the outfield. He was very successful in the Sox' chain but never was able to break through to the majors.

Boston traded Pearson to the Senators in January of 1958 and he became the Nats' starting centerfielder. He hit .275 and excelled in the field. He won the RoY award over Ryne Duren and Gary Bell.

It can't be very often that a player comes off a Rookie of the Year season and finds himself dealt off within a few months. That's what happened to Pearson in 1959. He was hurt and his bat failed him and the Senators traded him to the Orioles in May.

The Angels drafted him from the Orioles in the '61 expansion draft and he played the rest of his career with the Halos. He had his best overall season in 1963 and made the All-Star starting lineup, getting a couple of hits in the game. He played into the 1966 season and then retired to devote his life to his Christian ministries. That work continues today.

In 1960: Pearson split the year between the Orioles and their Miami AAA club hitting .244 in 48 games as the Orioles fourth outfielder.

Since his retirement, Pearson has served as an ordained minister and he and his wife established Father's Heart Ranch in Desert Hot Springs, California, a home for abused, neglected and abandoned boys. His foundation feeds Zambian youth who have lost their family to AIDS.

Pearson is a Renaissance man of sorts. He dabbled as a recording artist, actor, golfer, and disc jockey.

This 1963 article in Sports Illustrated is a fun read. It mentions how Pearson wrote letters to both the Red Sox and Angels trying to persuade them to take a chance on a 5' 5" ballplayer. And it recalls the advice he got from Ted Williams.

Ok, this is cool....Jackie Robinson hosted a series of short (<4 minutes) radio interviews in the late 50s, and one of his guests was Albie Pearson. Enjoy.

And here are a few shots of Albie and Marilyn Monroe taken as he escorted her onto the field for a 1962 pregame something at Dodger Stadium. Because why the hell not? 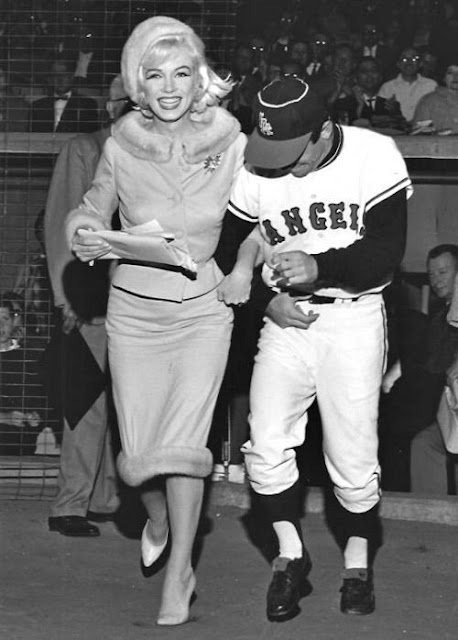 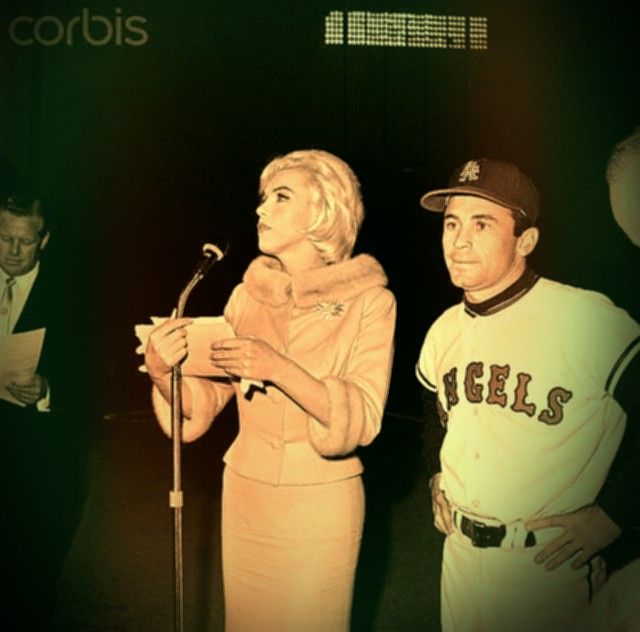 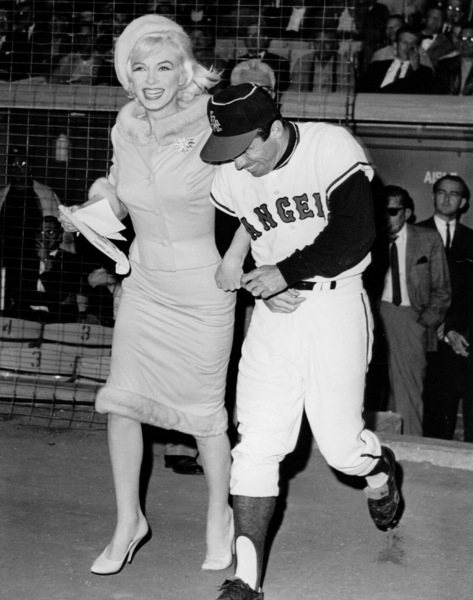 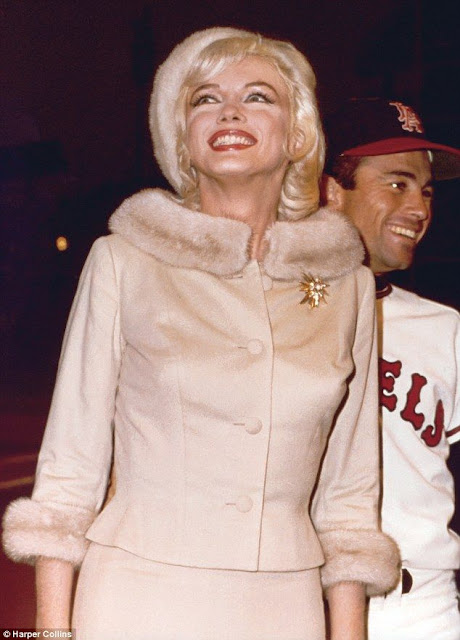 The Card: One of my favorites here. Albie's '59 card was in the first pack of Topps cards I ever opened, the only one I remember. So I have casually picked up more of his cards thru the years.

That's Orioles pitcher Arnie Portacerrero to Pearson's right with his back to the camera. Portacerrero will have a card coming up here soon. I believe (but wouldn't gamble on) that Griffith Stadium is where this was taken. Comisky also had those types of windows behind the home plate sections but these just seem different. They seem to be wider than those in the old Chicago place. If I could see just a bit more of the upper set of windows I'd know for sure. Comiskey's were very distinctive. They looked like silhouettes of the Astrodome.
Posted by Commishbob at 7:00 AM