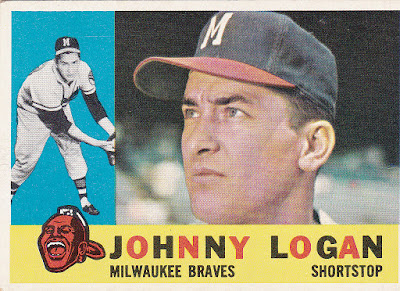 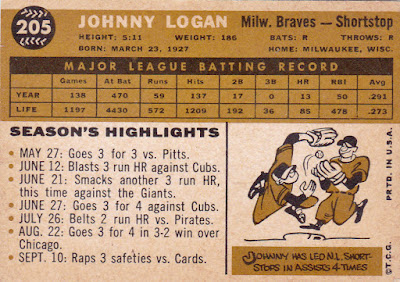 Career: Logan was a four-time All-Star as the Braves' starting shortstop through the 50s. He was a spark plug on their '57/'58 NL title teams. He received MVP votes nearly every year in Milwaukee. Logan began as a pro with an extended run in the then-Boston Braves system where he showed an ability to hit and field very well. His rise thru their chain was slowed because they had Alvin Dark clogging the ladder at the top.

He didn't have much luck at the plate during the two Series he played in, but he did homer off Bobby Shantz in Game Two of the '57 Classic, a game won by Lou Burdette. Logan finished his career with a run in Pittsburgh as a bench piece, after which he played one season in Japan before retiring.

In 1960: This was his last full season with the Braves. His numbers were down across the board with his average falling nearly 50 points and his homers going from 13 to 7. It also ended up also being his last year as an everyday player.

Off The Charts: He had a radio show in Milwaukee for a brief time after baseball and then worked as a welder on the Alaska Pipeline Project. He also dabbled in Milwaukee County politics by running for sheriff a few times while jumping back and forth between the Republican and Democratic tickets.