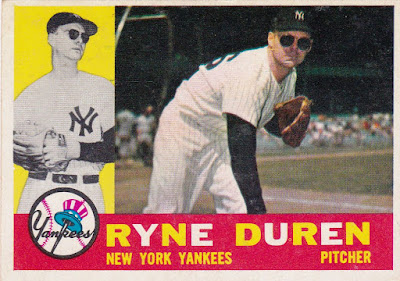 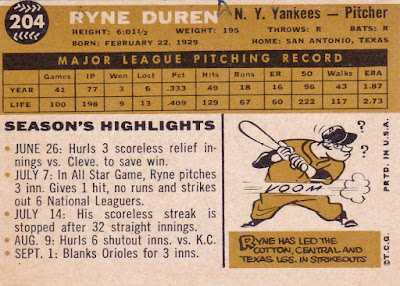 Career: Duren battled poor eyesight, wildness, and a drinking problem but overcame them all to forge an All-Star career and a post-playing life dedicated to helping teens and ballplayers with their own issues. He banged around the minors as a starting pitcher through several organizations for eight years before finding his niche in the Yankees' bullpen in 1958.

Duren led the league in saves that rookie year and was second in the RoY race. He pitched for the Yanks for four seasons and in two World Series. He had a save in the '58 Series that was very typical of him...two innings, no hits, three walks. His Yankee star faded after 1959 before moving on through several more clubs including the Angels in 1961.  That year he made his third AL All-Star team (after a trade from the Yanks in May) in a season he had a 5.19 ERA.

His final season in pro ball was in 1965 but by then his life had slid off a cliff, and he found himself without a payday. His path soon took even darker turns until nearly two years of being institutionalized changed him. He spent the rest of his days as an addiction counselor.

In 1960: Coming off two excellent seasons Duren had problems in 1960 and didn't pitch well, or often. He had only eight saves and posted an ERA close to 5.

Off The Charts: Duren wrote two books about his career and life. His SABR bio is highly recommended.

Mt father loved Ryne Duren. He delighted in telling me that Duren would throw warm-up pitches to the backstop and squint at the catcher's signs to scare hitters. I don't recall ever seeing either but it sure tickled my Dad.