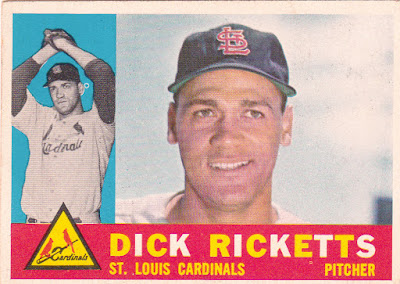 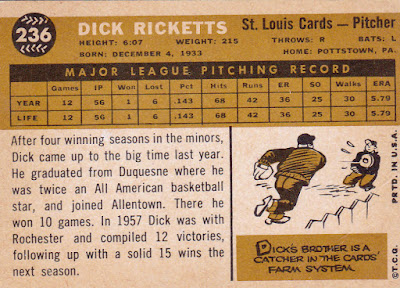 Career: Dick Ricketts (and fellow big leaguer brother Dave) were basketball and baseball stars from Pottstown, Pa. Dick went on to excel in hoops at Duchesne University and was the #1 overall pick in the 1955 NBA draft by the St. Louis Hawks. For a few years, Ricketts spread his talents over two pro sports. He pitched in the Cards' chain while also playing in the NBA. Ricketts played three seasons for the Hawks and Royals before turning to baseball fulltime.

Ricketts had a decade-long minor league career as a pitcher in the systems of the Cards and Phils. He made the majors with St. Louis in the middle of 1959 and appeared in a dozen games, nine being starts. He went 1-6 and his other numbers were no better. That six-week run was the extent of his big league career.

In 1960: Ricketts had spent his last days as a major league player at this point. He spent the season with Rochester of the International League, a Cardinals' AAA club. In 30 starts he went 9-13 with an ERA over 4.30 and was pitching his way out of the Cards' organization.

Off The Charts: While his brother Dave was a catcher for the Cardinals, the two were never a battery for the team. In fact, Dave was serving in the military during Dick's brief St. Louis run. But they were both in Rochester with the AAA RedWings in 1957 and 1960. Dave, newly signed and arriving in June of that '57 season, was behind the plate for Dick's near no-hitter on the 12th. In that game, Dick had a two-out, two-strike situation in the ninth when he allowed that one hit. Dave Ricketts reached the majors in 1963.

The Card: Dick Ricketts had his rookie baseball card in 1959: 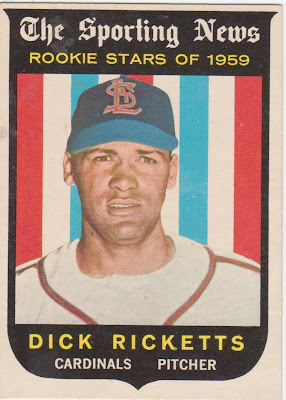 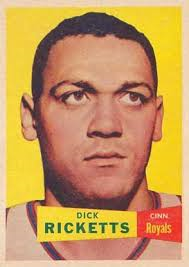 Posted by Commishbob at 8:39 PM