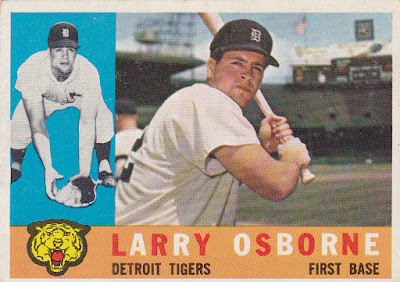 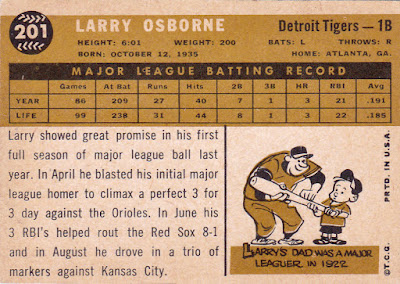 Career: Bobo (or just 'Bo') Osborne must have loved baseball because he spent a lot of time riding the busses through the minors both before and after his major league career. He had passed up a football scholarship at Auburn and signed with the Tigers in 1953. He fought his way up the ladder and finally won a job with the Tigers in 1959. The Georgia native played about half the games that year, mostly at first.

He returned to the Tigers after another minor league season and spent '62/'63 as a bench piece who didn't see much playing time. A trade to the Senators saw him get a full-time spot for the first and only time in the bigs. He played in 125 games for the Nationals, struggled at the plate, and then returned to the minors where he stuck it out for six more years. He was later a scout for the Giants.

In 1960, Mr. Osborne enjoyed what might have been the highlight of his baseball career. Playing for Denver, the Detroit Tigers’ Triple-A affiliate, he battled Carl Yastrzemski, a Red Sox prospect with Minneapolis at the time, for the American Association batting title. It was decided over the last two games of the season, with Mr. Osborne winning with a .342 batting average to Yastrzemski’s .339. With 34 home runs and 119 RBIs, Mr. Osborne also was the league triple crown winner that season.


Off The Charts: Bobo's dad, Tiny, was a pitcher for the Cubs and Dodgers in the 20s. That is mentioned with the cartoon on the back.

The Card: I haven't noticed a lot of Tiger Stadium shots in this set. But this is one of them. I'm happy that the checklist has progressed back to the cream-colored card backs. The gold/cream/black backs rank up there with my all-time favorites. Nice color combo on the front, too.

EDITED TO ADD: Since I have mostly completed my research into the set's color combos I have found that Osborne's card is the first one in the checklist that has red as the first color in the name. Up until this point every one-player card had the name printed with yellow or black as the first letter.
Posted by Commishbob at 7:00 AM