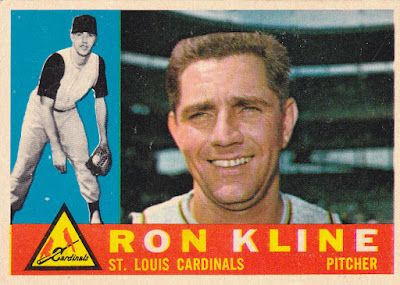 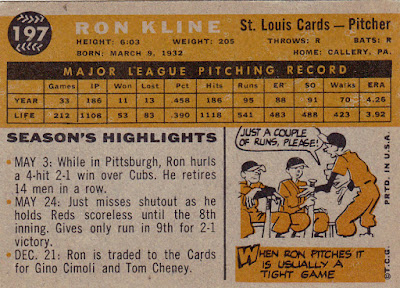 Career: Ron Kline was a Western Pa. kid who was signed by the Pirates after a try-out in Forbes Field in 1950. He went on to pitch for 17 major league seasons, eight of them for the Bucs. He made the roster in 1952 and stayed busy for half the season but was 0-7 and did some minor league time that year as well. Kline served two years in the Army and returned to the Pirates in 1955.

Kline was primarily a starter at this point and remained one for the rest of the decade with mixed results. He had some decent numbers but pitching for bad teams caused him to lead the NL in losses twice. After a year with the Cardinals, Kline made himself over as a reliever. Other than a four-year run with the Senators, he bounced around the majors with short stays with the Angels, Tigers, Red Sox, Pirates (again), Twins, Giants, and Braves.

In 1960: His only year in St. Louis proved to be a disaster. He made 17 starts (all before July 4) and an equal number of relief appearances to the tune of a 6+ ERA. The Cards cashed out by selling him to the fledgling Angels just before Opening Day, 1961.

Off The Charts: Kline returned to his beloved Callery, Pennsylvania after his playing days. He was a car salesman (he had earlier co-owned a dealership), ran a bar, and served as a baseball coach and the mayor.

The Card: A second Cardinal pitcher within a couple of spots in the checklist is a sure sign of a guy who was traded too late to finagle the list. Topps was able to include the trade on the back of the card. I will sometimes try to figure out what '59 'Season's Highlight' was bumped to include the trade notation. In Kline's case, I'd bet on an 11-inning complete-game five-hit win over the Reds on July 5. A notoriously bad hitter, Kline even had a hit and two RBIs in that game!
Posted by Commishbob at 6:30 AM