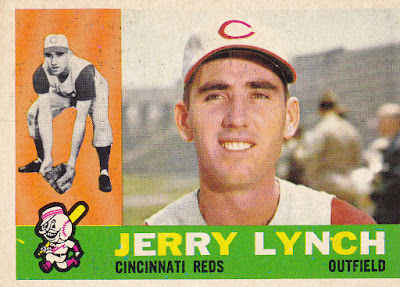 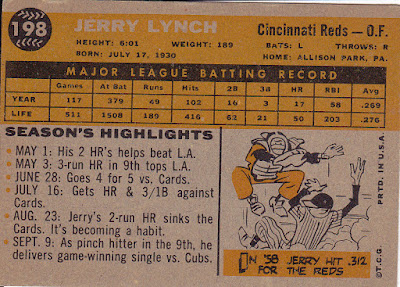 Career: Jerry Lynch was the game's premier pinch-hitter for a number of years in the late 50s and early 60s. His career spanned 13 seasons, with two nearly equal runs in Pittsburgh bracketing a six-plus season stint with the Reds. He had a few seasons where he was a 'nearly-everyday-starter', but a lot of his time was as a platoon guy and lefty off the bench.

His pro career began at 19 with a season at the Class C level on an independent team in the Cotton States League in 1950. Uncle Sam had him for two years, and then he signed with the Pirates, debuting in 1954.

According to Wikipedia Lynch 'had 116 pinch hits during his career, which ranks him 10th on the all-time list. Lynch is third on the all-time pinch-hit home run list (he was first when he retired) with 18, with five of those coming during the 1961 season while driving in 25 runs.'

In the 1961 World Series, he was hitless in four trips but his homer on September 28 in the eighth inning versus the Cubs was the blow that clinched the pennant for the Reds.

Off The Charts: In his New Bill James Historical Baseball Abstract, James made a case for Lynch being named MVP for his 1961 heroics.


"He hit over .400 as a pinch hitter with power and played 44 games in the outfield. His slugging percentage of .624 and 50 RBI in 181 at-bats was a far better rate than Roger Maris had that same season, hitting 61 home runs," James wrote. "More than that, Lynch had big, big hits; game after game, when the Reds were in danger of falling short, Lynch came up with the big hit to put them back in front, and the Reds, picked to finish sixth, won the pennant."

The Card: Lynch also appears on a special, multi-player "Cincy Clouters" card with Gus Bell and Frank Robinson in this set that was posted back in 2016.