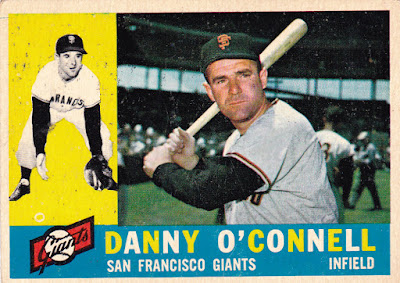 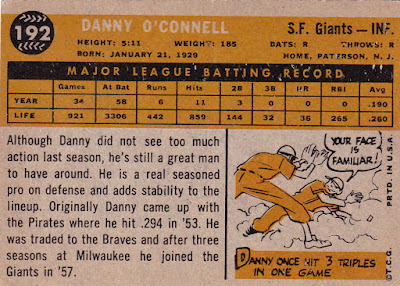 Career: The Braves sent six players and $100K to the Pirates for O'Connell in 1954. They were hoping he was the piece of the puzzle they needed to jump to the top of the NL. O'Connell had been big stuff in the Brooklyn organization and played very well for the Pirates in his two big-league seasons He was third in RoY voting in '53 and garnered some MVP votes in '54. But he was never the player the Braves had hoped for (and had paid such a big price for) and he was sent on to the Giants after three seasons of diminishing returns in Milwaukee.

His production was no better in San Francisco, and he made his own deal to play for the expansion Senators where he spent his final seasons in the majors. He was a player/manager for the Nats' top farm club for a year and then spent a couple of seasons coaching with the Senators.

In 1960: Coming off a season with the Giants during which he got into only 34 games, O'Connell was not in the majors. He played for the Giants' Tacoma farm club in the PCL and hit a robust .312, paving the way for his signing in Washington.

Off The Charts: O'Connell was from the same Essex County area of New Jersey where I spent many years as a kid. He died in a truck crash caused by his heart attack in 1969. He was only 40.
Posted by Commishbob at 7:00 AM