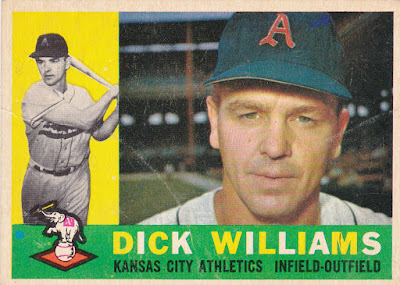 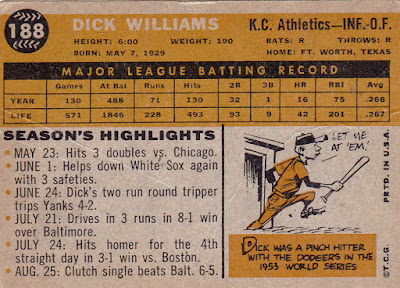 Career: Williams made his name as a manager who won a couple of titles and four pennants. But he was also a jack-of-all-trades player whose career lasted 13 years. He began in Brooklyn in 1951 after four seasons in the minors where he showed superior hitting skills. He bounced between the Dodgers and their high minor league teams for several years playing the outfield.

A 1956 trade to the Orioles gave him a full-time spot for the first time in his career. He played everywhere on the field except catcher and pitcher and the steady work allowed him to show off his hitting. He was never a power threat but his average and versatility seemed to make him a valuable trade piece. Williams played for Cleveland, Baltimore (again), Kansas City, Baltimore (again!!), and finally, the Red Sox. He even was dealt to the Colt .45s in the winter of 1962 by the Orioles but was then traded to Boston a few weeks later. He finished his career with a .260 average, and he had a hit in two at-bats in the 1953 World Series for the Dodgers.


In 1960: In his second year with the Athletics he upped his average to a career (as a regular) high of .288 and added a dozen home runs to the mix. He started most of his games at third but had a fair share of time in left and at first.

Off The Charts: Williams earned his Hall of Fame status as a manger. He began at the helm of the Impossible Dream Red Sox in 1967. He went on to manage for 21 years in the dugouts of the Athletics, Angels, Mariners, Padres, and Expos in addition to the Sox. Williams was involved in his fair share of controversies as a manager, but he won titles in Oakland in 1972 and '73.