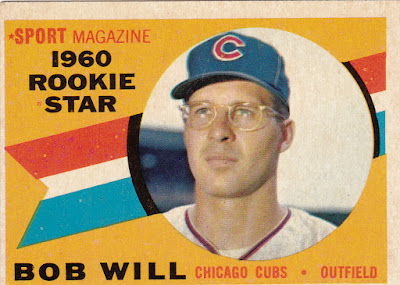 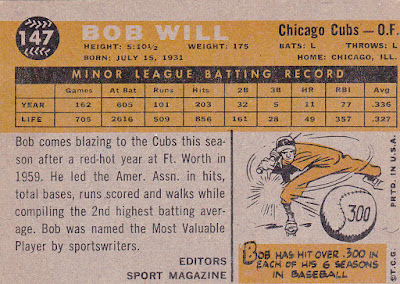 Career: Bob Will was a local kid who played for the Cubs for all or part of six seasons. He broke in with Chicago in 1957. In a 70 game 'trial' he didn't hit nearly as well as he had in the minors where he had put up huge numbers year after year. Will had one season as a regular in the Cubs' outfield but for the most part was a pinch-hitter. He led the NL in pinch at-bats in 1961 and had 17 pinch-hits in 1962. His career average was .247 in just over 400 games.

In 1960: This was his season as an everyday starter in right at Wrigley. He played next to former Hall of Famer Richie Ashburn and he hit .255 with six homers. In '61 Will lost the spot to George Altman as the Cubs sought much-needed power.

Off The Charts: Will attended Northwestern University in Evanston. Apropos to nothing baseball-related, my daughter lives close to that school's beautiful campus. Will held degrees from Minnesota State and the University of Wisconsin Graduate School of Banking. He loved to golf and worked in banking after his playing days. He was active with the MLB Alumni Association.