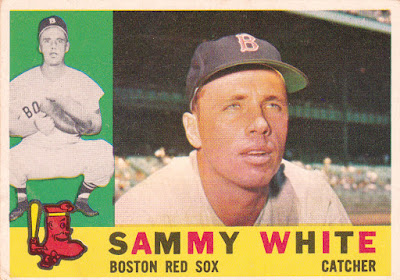 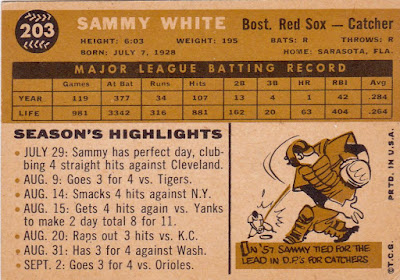 Career: White held down the Red Sox catchers job from 1952 through 1959. He was a career .262 hitter with exceptional skills behind the plate. He had spent three years in the Sox' system before his rookie year when he hit .281 and was third in the AL RoY voting in a very close race with 15-game winner Harry Byrd of the A's and fellow catcher Gus Triandos of the Browns.

White played briefly and sparingly for the Braves and Phils to close out his career in 1961/62. He then ran his bowling center and was a golf pro in Hawaii.

In 1960: He was traded to the Indians in March but rather than report to Cleveland's spring camp, White 'retired', and spent his year at his business. He was talked out of retirement by the Braves the following summer to fill in for an injured Del Crandall.

Off The Charts: White's SABR bio has this to say about his defensive abilities: Casey Stengel, who managed the New York Yankees to six American League pennants and four world championships during White’s tenure as the regular Red Sox catcher, was one of Sammy’s biggest fans. Stengel got to see White in action up to 22 times each year under the old 154-game schedule, and he used to shake his head at Sammy’s ability to “frame” a pitch. “He [White] steals more strikes from umpires than anyone else,” Stengel would tell anyone who would listen. “I’m not being critical,” Stengel would add, “I’m just bowing to his skill.”

Posted by Commishbob at 5:33 PM