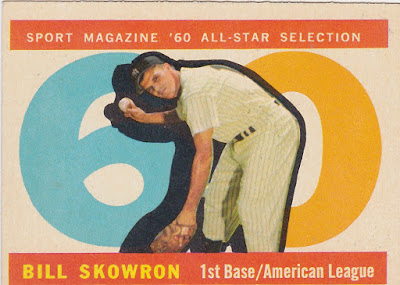 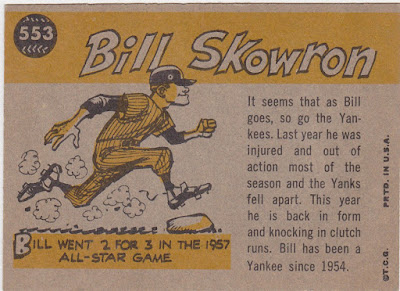 As an All Star: Skowron was a four time All Star as a Yankee. He was selected as the starting first baseman for four straight years beginning in 1957. He was 6 for 14 with a double over his five games.

The Card: Another nice Jack Davis cartoon. Interesting that Topps references the Yankees as 'falling apart' in 1959.
Posted by Commishbob at 6:30 AM No comments: 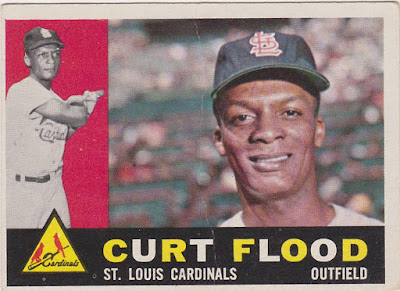 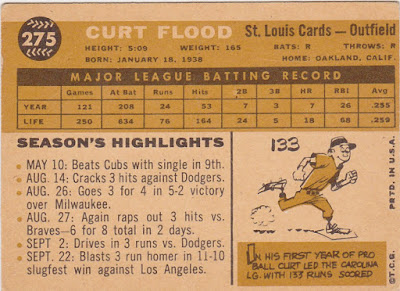 Career: He was originally signed by the Reds but he was a three time All Star in 14 seasons with the Cardinals. Won seven Gold Gloves and two World Series rings. Led the NL in hits in 1964. Multiple time leader in fielding categories. He's best know for his groundbreaking stand against baseball's reserve clause. This story at The Atlantic is a good read about that aspect of his life. He actually returned to the field for a brief stint with the the Ted Williams managed Senators in 1971.

In 1960: This was Flood's last of three seasons as just an average big league starter. He had hit .261 as a rookie and had seen his numbers sliding. He hit .237 in 1960 but raised his average about 80 points the next year and hit over .300 in six of the next nine seasons.


Despite his outstanding playing career, Flood's principal legacy developed off the field. He believed that Major League Baseball's decades-old reserve clause was unfair in that it kept players beholden for life to the team with which they originally signed, even when they had satisfied the terms and conditions of those contracts.

On October 7, 1969, the Cardinals traded Flood, Tim McCarver, Byron Browne, and Joe Hoerner to the Philadelphia Phillies for Dick Allen, Cookie Rojas, and Jerry Johnson. Flood refused to report to the moribund Phillies, citing the team's poor record and dilapidated Connie Mack Stadium, and for (what he thought were) belligerent—and racist—fans. Flood said, "That I didn't think that I was going to report to Philadelphia, mainly because I didn't want to pick up twelve years of my life and move to another city."


The Card: This one is cropped strangely with Flood being somewhat off-center. The stadium is San Francisco's Seals Stadium. It's easy to tell by the red hand-railings visible in the out-of-focus background.

I love the color combo, the cream and gold back and the highlights text. It's one of my favorite cards in the set.
Posted by Commishbob at 11:00 AM No comments: