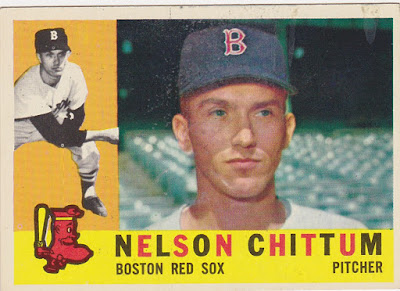 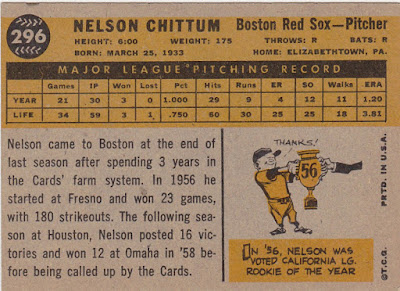 Career: He pitched in 40 big league games, all but two in relief, for the Cardinals and Red Sox between 1958 and 1960. His career mark was 3-1 with a 1.35 WHIP. Chittum had outstanding numbers as he moved up the Cardinals' chain from 1956 through 1958. But his brief tenure in St. Louis was not impressive and he was traded to Boston, His three 1959 wins and solid numbers in limited duty in '59 likely earned him a spot in this set.

In 1960: Chittum opened the season with the Sox but was dealt to the Dodgers for Rip Repulski early in May. He was sent to Omaha (AA) by the Dodgers and never again reached the majors. He finished with a couple of seasons in the Orioles system.


Chitttum once described his pitching style: "I threw everything but the ball. I'd throw 'em the arm, the elbow, the glove, and then I'd throw the ball…I had a good sinker, a good slider, good location. I didn't walk anybody, didn't strike out many guys but kept the ball down, made 'em hit ground balls, pop flies."


The Card: Not a bad card of a not very well known player. The addition of orange to the fairly common yellow/red/black scheme is actually nice.

The Red Sox made two trips to Yankee Stadium after Chittum was called up by the Sox in August of 1959. Topps was there to snap this shot.
Posted by Commishbob at 8:17 PM No comments: 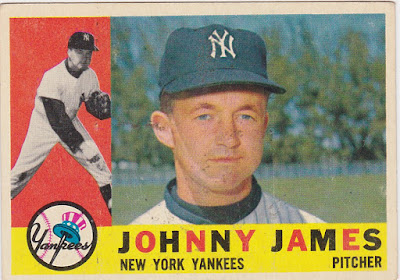 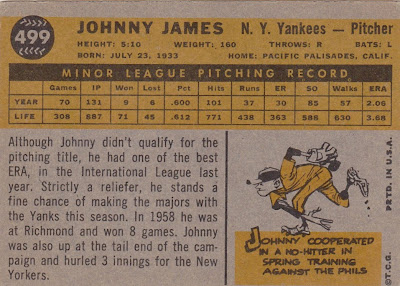 Career: Threw a couple of innings in 1958 with the Yanks but had longer stints in 1960 (Yankees) and 1961 (Angels). He wasn't an expansion pick by the Angels but was dealt there a month into the '61 season. In 66 MLB games (3 starts) he won five games and lost three.

WikiFacts: From a Seamheads.com interview in 2009:


In 1960 I was doing pretty well. I was 5-1 and had pitched in more games than any other pitcher. Casey comes with a left-handed pitcher who was playing down in Richmond, named Billy Short. He called me into the office after I had pitched the last four innings of a game against the White Sox, and sent me back to Richmond. I had an option left in my contract. The guys told me he didn’t really want to send me back, he wanted to get rid of Duke Maas, but Casey had a thing about, a fear I should say, about giving up a player who might be picked up by another team in the American League, and the possibility of hurting the Yankees later on.Since they had an option on my contract, they didn’t have to ask waivers on me. They sent me back, which really kind of broke my heart, and I didn’t really react to it very well.

The Card: I think he sort of resembles Bobby Shantz but that has nothing to do with the card I guess. Spring training photo and probably the only Topps card to ever reference a spring training no-hitter with a cartoon.

Posted by Commishbob at 12:40 PM No comments: