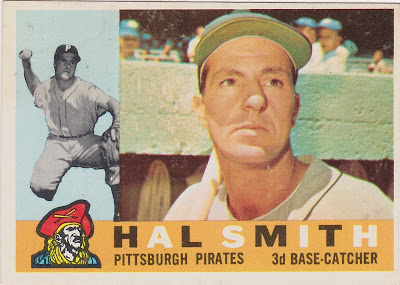 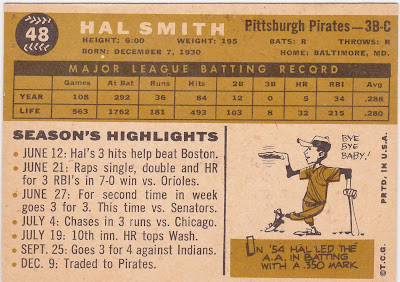 Career: Smith signed in 1949 with the Yankees (who seemed to sign every catcher in America) and was dealt to the Orioles where he emerged as the #1 catcher in 1955 before landing in Kansas City. He went on to play for the Pirates, Colt 45s and Reds in his 10-year career. He finished with a respectable.267 average and had three double-digit home run seasons.

In 1960: Lucky Hal came over from the bottom-of-the-standings Athletics to the Pirates just in time to be a part of the World Series championship. He went from getting into about 100 games a season in KC to just 77 with the Pirates. He hit .295 as he transitioned back to being a catcher after a few seasons playing primarily at third with the Athletics. In the World Series he was 3 for 8 and had a moment to remember. He hit a three-run homer in Game Seven to put the Pirates on top (temporarily) 9-7 in the bottom of the eighth. We all know what happened in the ninth.

Off The Charts: How's this for a Baseball Reference transaction entry?


The Card: He's wearing Athletics duds and this is likely from Yankee Stadium but there's not much to go on. The golden orange, black and white is close to Pirates' colors which is nice. The listed highlights assume we know he played for the A's in 1959.
Posted by Commishbob at 8:30 AM 1 comment: 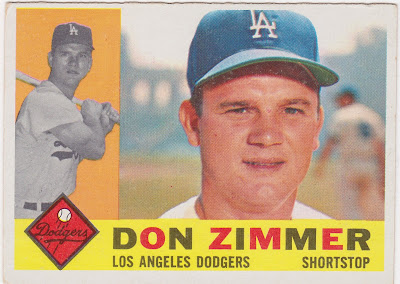 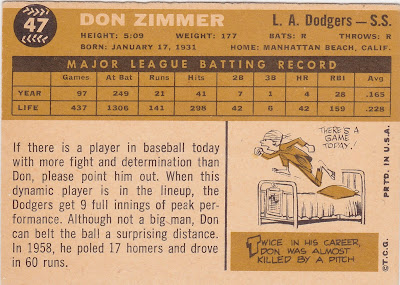 Career: Zimmer is probably the 'baseball lifer'. He said many times that he never drew a paycheck other than from a baseball team. He played a dozen years in the majors, about as many in the minors and Japan. He managed in the majors for 13 seasons and then coached into his 80s. Oh, and he worked as a coach and manager in the minors as well.

In 1960: He had already moved on to the Cubs when this card was issued. He was the regular second baseman on the North Side and hit .258 with six homers. He played one more season with the Cubs and made the 1961 All-Star team.

Off The Charts: Wikipedia sez: During a minor league game on July 7, 1953, Zimmer was struck by a pitch thrown by pitcher Jim Kirk, causing Zimmer to lose consciousness. He suffered a brain injury that required surgery. He woke up two weeks later, thinking that it was the day after the game where the incident took place. This led to Major League Baseball adopting batting helmets as a safety measure to be used by players when at-bat.

The Card: Love the shot of Zim with the Coliseum as the backdrop. I wish I could make out who the player behind him is but the number is unclear. The blurb on the back really sings his praises and the cartoon is one of the better ones and looks (to my eyes at least) to have been done by Jack Davis. Underrated card to be sure!

Posted by Commishbob at 11:14 PM No comments: 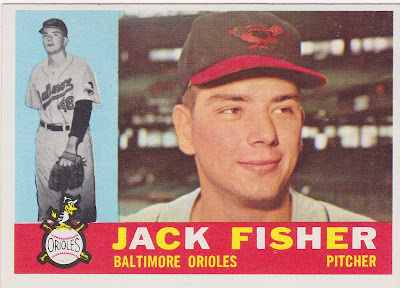 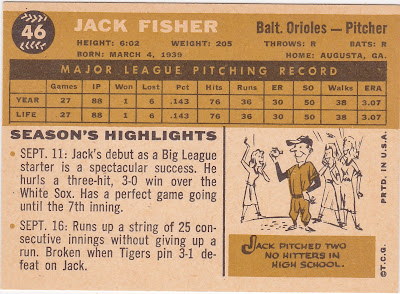 Career: Fisher was a member of the Orioles 'Kiddie Corps' when he broke in. He, Steve Barber, Chuck Estrada, and Milt Pappas, all 22 or younger, made up a starting staff that nearly carried the Orioles to their first pennant in 1960.  He pitched two effective seasons for the Birds before bouncing between the Giants, Mets, White Sox and Reds until he retired with an 86-139 career W/L mark following the 1969 season.


In 1960: He won 12 games for the Orioles including a stretch of nearly 30 consecutive scoreless innings in August/September. It was his best year in the majors. He also hit his only career homer. It came off Bobby Locke who's card was the previous one posted on this blog.

Off The Charts: Fisher served up three memorable homers during his career:

In 2014 The New Yorker had a short piece in which they interviewed Fisher on that Ted Williams homer. Interesting stuff.

The Card: I was settling in as an Orioles fan about the time Fisher was emerging with the Orioles and he was a favorite of mine back then. That makes this one of my favorite cards in the set. It's one of the few that have a season's highlights list with just two highlights. It has one of the better 'action' photos ...at least as far as being clear and decently cropped and pasted on the solid background goes. The cartoon, with those cheering high school girls, a nice ballpark portrait, and the color scheme makes this one a keeper.


Posted by Commishbob at 4:40 PM No comments: 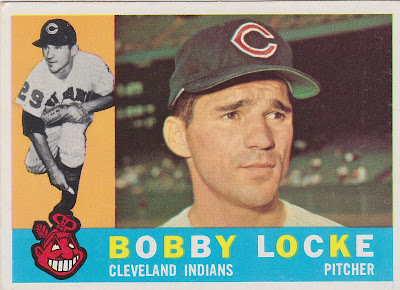 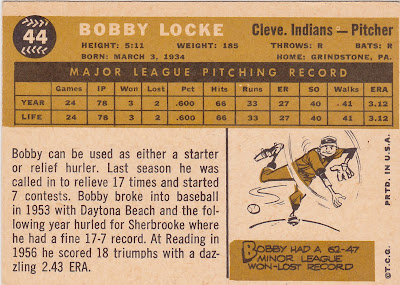 Career: Over the course of nearly a decade Locke pitched for five clubs but the majority of his career came with the Indians from 1959 to 1961. He was a spot starter with Cleveland and strictly a reliever everywhere else. He amassed a 16-15 record with an ERA of about 4.00 for his career.

Off The Charts: Here's an interview that Locke's grandsons did with him last fall:

The Card: This is Locke's rookie card, at least as far as mainstream sets go. That's Municipal Stadium behind him. I have a small Locke collection that was inspired by pulling a nice signed '68 from a Heritage pack a couple of years ago. I posted that PC on my 5 Tool Collector blog. 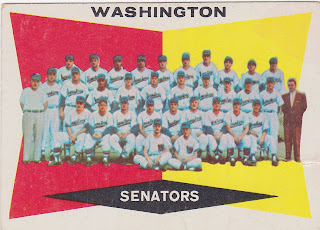 The Team: The 1960 Senators were the last edition of the original franchise in the nation's capital. In 1961 they were the Twins and an expansion Senators team was playing in D.C.

This club had the nucleus of the better Twins' clubs of the mid-60s including Harmon Killebrew,  Zolio Versalles, Earl Battey, Bob Allison, and Camilo Pascual. They were 5th in the AL in the standings and last in attendance.

The back of the card is a marked checklist. 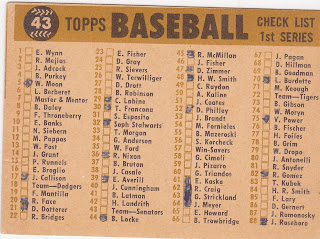 The Manager: Cookie Lavagetto had a ten-year big league career as an infielder with the Pirates and Dodgers. In the middle of his playing days, he served four years in the military during WWII. He was a full-time starter in Brooklyn for the five seasons leading up to his military service and was an NL All-Star for four of them. He managed the Senators through their transition to Minnesota. The '60 finish, fifth place, was his best. I commented on this card, and posted some links to Lavagetto's 1947 World Series notable moment, over on my regular blog. It's near the bottom of that post. Ignore the Facebook stuff, I'm gone from there. 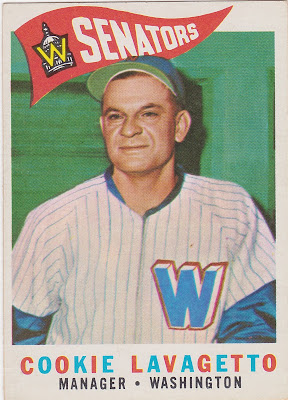 The cartoons on the backs of these manager cards are great as the artists had room to stretch out a bit. 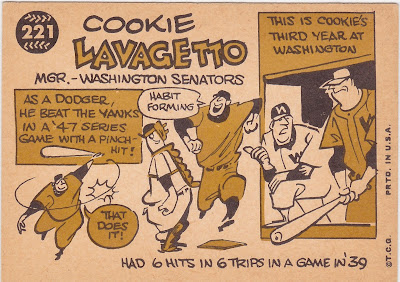 The Coaches: Sam Mele stands out in this group. He had a solid, if unspectacular, ten-year career as a member of the Red Sox and several other AL clubs in the 40s and 50s. He took over for Lavagetto as Twins manager in 1961 and was in the dugout for the 1965 AL pennant.  Bob Swift was a bench player for several clubs for 14 seasons in the 40s and early 50s. He managed the Tigers for two short stints in 1965 and '66. Ellis Clary was a long-time minor league infielder who made the majors for a few seasons during WWII. He spent nearly three decades as a coach and scout for the Nats, Twins, White Sox and  Blue Jays. 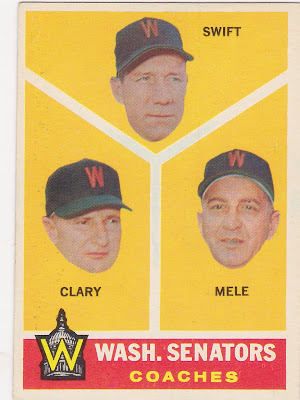 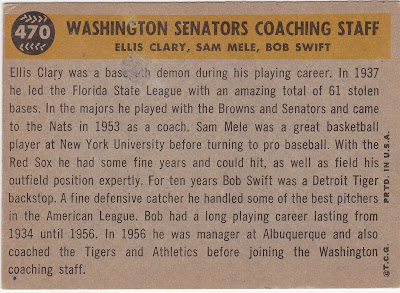 Posted by Commishbob at 9:37 AM No comments: 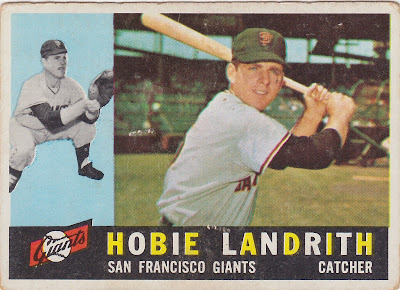 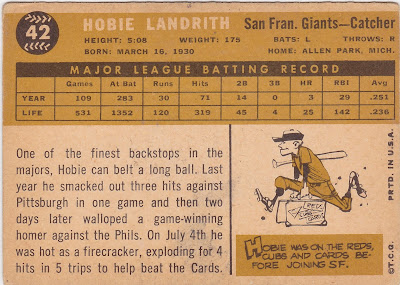 Career: I recently detailed this when I posted his card on my '58 set blog. Why repeat myself?

In 1960: He was coming off the second busiest season of his career but couldn't match it, either in games played or stats. He essentially flipped roles with Bob Schmidt who had backed him up with the Giants in '59 but took the bulk of the work in '60.

Off The Charts: Hobie's Wikipedia page is longer than many that of some US Presidents. Someone is a big fan.

The Card: Given what Topps wrote in their blurb on this card I would have expected a season's highlights bullet list. The front is pretty sweet. I like the color combo and the posed 'action' shot. Looks like Wrigley Field.
Posted by Commishbob at 11:02 PM No comments: 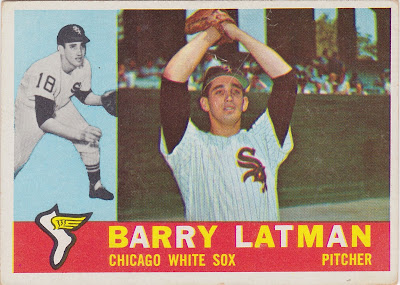 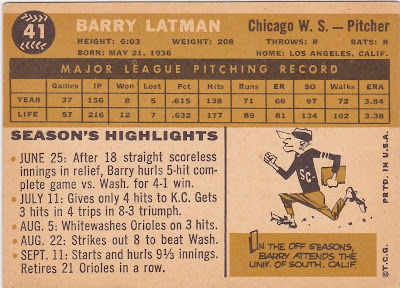 Career: Barry Latman's career peaked in 1961 when he was an All-Star for the Indians and fashioned a 13-5 recond for a club that was five games below .500 for the season. In all, he pitched for 11 years for the White Sox, Indians, Angels, and Astros. That '61 campaign was the only time he had more wins than losses. He only taste of the postseason came in 1959 with the Sox but he didn't get into a game.

In 1960: On the eve (literally) of the season, Latman was dealt to the Indians for Herb Score. As Cleveland's fourth starter he had a pedestrian 7-7 mark with an ERA about 4 and a WHIP approaching 1.5.

Off The Charts: From Latman's SABR bio page..."In 1954 [as an 18-year-old], Latman began a five-year correspondence with Ty Cobb, who had seen him pitch on TV. After some time the two met and Cobb watched Latman pitch. He told Barry that he had the stuff to pitch in the major leagues, and sent him a series of encouraging letters."

Off the Charts II: Grammarly wants to auto-correct 'Latman' to 'Batman'. Every time.

The Card: Light blue and red combo with the old Comiskey in the background...nice. Add a fun Jack Davis cartoon and the SH bullet list and you've got a nice card. I like it despite the fact that two on Latman's 'highlights' came against my Orioles.
Posted by Commishbob at 4:40 PM 1 comment: 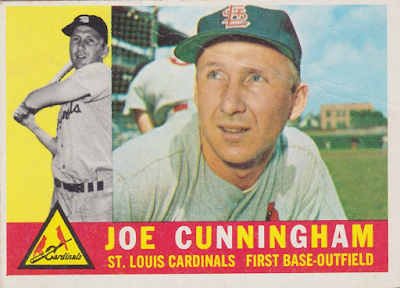 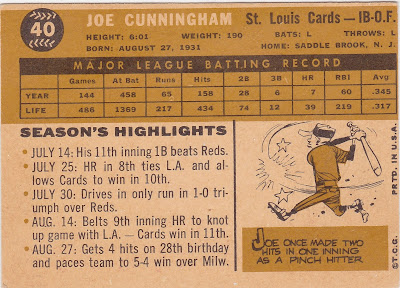 Career: Spent several years climbing thru the stacked Cardinals' system with an Army sting thrown in. His .284 average as a part-time starter in 1954 wasn't enough to earn his spot going forward and he returned to the majors in 1957 with a solid year. Had four more seasons with the Cards before being dealt to the White Sox in 1962. After one good year, his playing time decreased and he moved on to the Senators, retiring after a handful of 1966 at-bats. In 7 years with the Cards, he had a .304 average and made the All-Star team in 1959. That season he finished 2nd to Hank Aaron for the batting crown and led the NL in OBP.

Off The Charts: Wikipedia reports that "Cunningham's big league career started with a bang. He homered once off Art Fowler of the Cincinnati Redlegs in his big league debut on June 30, 1954, and then hit two off Warren Spahn of the Milwaukee Braves the next day, July 1st, to set the record for most home runs in a player's first two major league games"

The Card: That's Wrigley in the photo and the building over Cunningham's shoulder now has a set of bleachers on top of it. That may well be #6, Stan The Man, bending over in the background. Don Blasingame wore #8 in 1958 so that's another possibility.
Posted by Commishbob at 1:24 PM No comments: 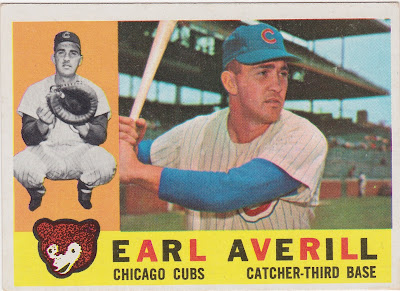 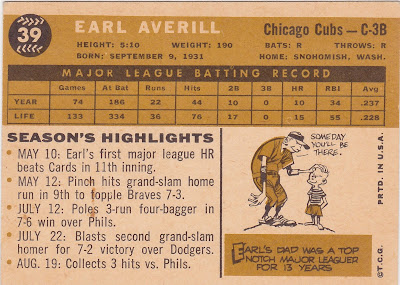 Career: The son of Hall of Famer Earl Averill, this Averill played for five franchises over a seven year career. He was a 'platoon starter' in 1959 for the Cubs and in 1961/62 with the Angels where he had his best numbers.

In 1960: This season was wedged in between his two most productive in the majors. He hit .233 with one dinger over 62 games. He opened the season with the Cubs, was dealt to the Braves in July and, without having played a game for Milwaukee, was traded to the White Sox a month later. Hopefully he hadn't given up he lease in Chicago. That December he was taken by the Angels in the expansion draft meaning he was with four clubs in five months.

Off the Charts: In 1962 he set an MLB record that he shares with Piggy Ward. He had the most consecutive plate appearances reaching a base by any means with 17, which he did from June 3 to June 10, Although sometimes refered to as 'Earl Averill Jr.', he and his better known dad had different middle names.

The Card: Great to see Wrigley in the background. Fun cartoon that references his Dad's career.
Posted by Commishbob at 1:23 PM No comments: