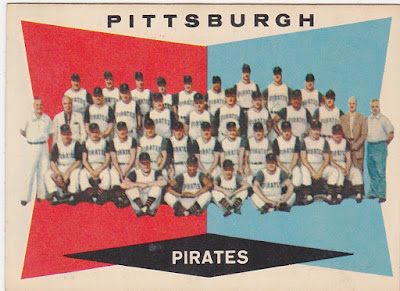 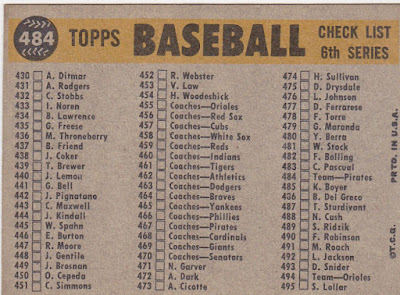 In 1960: Hail to the Champs! This 1960 Pirates squad was the one that beat the Yankees in a remarkable seven game Series capped off by Bill Mazeroski's epic homer. I will never forget watching the end of that game after having rushed home from school. Rather than recount the remarkable events of that day I'll link to a 2010 story by ESPN's David Schoenfield. He runs theu the game inning-by-crazy-inning and makes a case for it being the best game ever.

The Bucs led the NL in batting average, OPS, runs, OBP, doubles and RBIs. They were second in slugging. On the mound they were at or near the top in most major categories and their fielding percentage tied for the league lead.

Dick Groat won the NL batting crown and Roberto Clemente was fourth. Bob Friend and Vern Law led the staff and Elroy Face was the stopper with 10 wins and 27 saves out of the pen.


The Card: This one is in nice shape. Is that Clemente sitting up from with the batboys?


Managers Card: Danny Murtaugh managed the Pirates for 15 seasons with a winning percentage of .540 including two pennants and two World Series titles. On this card he's wearing the batting helmet seen on so many of the Pirates' players cards of the era. I've read that it was something Branch Rickey insisted on. 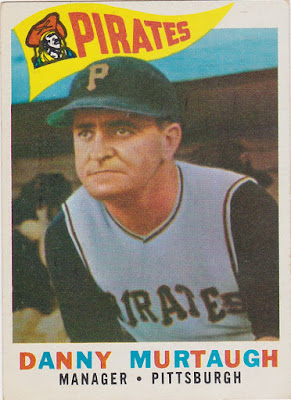 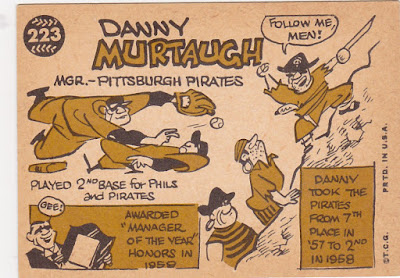 Coaches Card: Mickey Vernon is the best known of the floating heads seen here. He's was a two-time AL batting title winner and was newly retired from active big league duty after a 20 year career. Frank Oceak was a long time major and minor league coach and manager. He was on Murtaugh's staff for both Pirates championship teams.  Bill Burwell was a pitcher for the Browns and Pirates in the 20s and was another career coach and managers at all baseball levels. San Narron had a few glimces of the majors with the Cardinals. He was the uncle of Jerry Narron and grandfather of Sam Narron, both big leaguers. 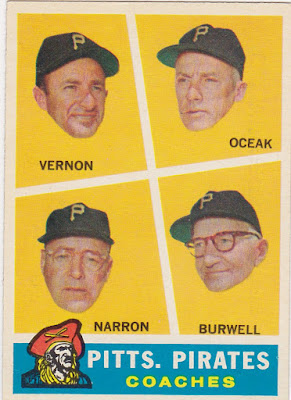 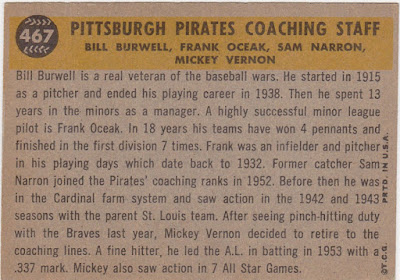 Posted by Commishbob at 10:47 PM No comments: