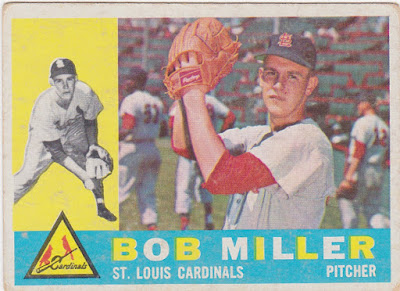 Career: Miller pitched for 10 different big league teams over 17 seasons. He began his career with his hometown Cardinals in 1957 and finished up with the Mets in 1974. He had previously been a member of the inaugural Mets club in 1962. Along the way, he pitched in World Series' with the Dodgers in 1965/66 and in 1971 with the Pirates. He won two rings. His career record was 69-81 with a very respectable 3.37 ERA in almost 700 games, almost 100 of them being starts. He was the NL's busiest pitcher in 1964 having 74 appearances.

In 1960: He pitched in only 15 games for the Cardinals and three minor league games. I'm assuming he was hurt during the season but I can't find any record of that.

Off The Charts: During that 1962 Mets' season, one of his roommates was Bob G. Miller, another bonus baby pitcher who played from 1953 through 1962 for the Tigers, Reds, and Mets. I'd imagine Casey Stengel had fun with that. This Bob Miller's name at birth was Robert Lane Gemeinweiser. A third Bob Miller, also a pitcher, was with the Phillies in the late 40s through 1958. Their careers overlapped but for various reasons, it seems the three were not all active at the same time.

The Card: Seals Stadium always provides a nice backdrop. I was a Rawlings guy when I was playing baseball and I always like seeing big leaguers who were also.


If you are scoring at home Topps threw a curve in 1959 by airbrushing the long-time Phils' Miller into Cardinal gear ....here is the 1958 card of Bob Miller of the Phillies. 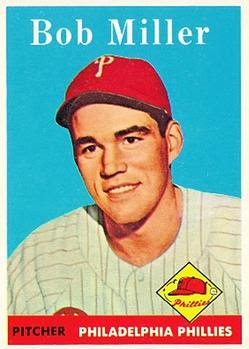 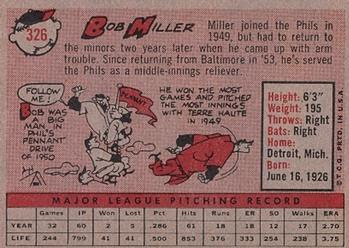 Then in 1959, they issued this card for that same Bob Miller as a Cardinal. Technically he was a Cardinal after coming over in a conditional trade in February. But he was returned to the Phils in April and never appeared in a regular game for St. Louis (or anyone else for that matter) in '59. Back with the Phils he did some minor league work and moved on to a Dodger farm club and then was out of the game. 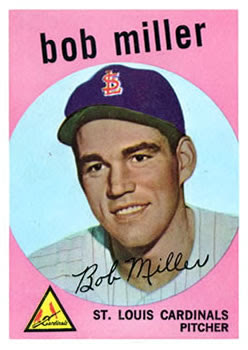 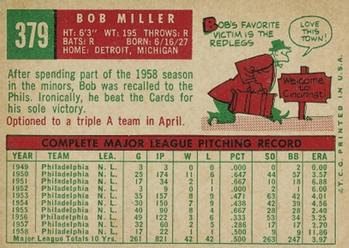 This had me scratching my head for a bit until I figured out the comings and goings of the Miller Boys. So it seems that this post's Bob Miller was indeed teammates of both the other Bob Millers during his career if we count Spring Training of 1959.
Posted by Commishbob at 9:13 PM No comments: 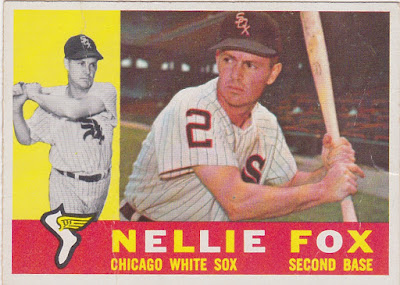 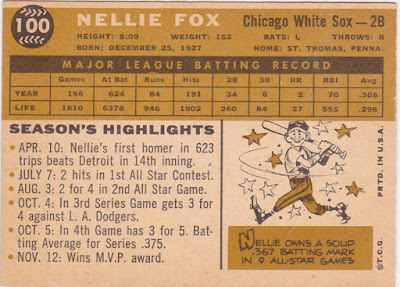 Career: Hall of Famer Fox was a 12 time All-Star with the White Sox. He sandwiched 14 outstanding seasons on the South Side between some time with the Philadelphia A's and a season and change with the Astros. Known as an outstanding bunter, he led the AL in sacrifice hits twice and was in the Top Ten 15 times. He rarely fanned and is fifth all-time in most AB per K.

In 1960: Coming off his MVP season of '59 his numbers fell slightly but he led the league in triples, won a Gold Glove, and made the All-Star squad. This is the last 'good' hitting year of his career.

Off The Charts: Wikipedia tells an interesting tale of how he began his major league career..."Fox at age 16 in 1944, thought that he had a good chance to sign on with a professional baseball team due to player shortages from World War II. His mother wrote a letter on her son's behalf to Connie Mack the owner/manager of the Philadelphia Athletics which enabled him to attend an open tryout that spring for the Athletics in Frederick, Maryland. Fox caught the attention of Mack who signed him to a professional contract."

The Card: Not sure how I've missed this thru the years but the White Sox unis, with the red-trimmed numbers and logos, sort of parallel the red-railed Comiskey Park seats. It's a neat little detail that I have to believe was intentional. That could be a Jack Davis cartoon although I wouldn't put money on it. Noting Fox' MVP award day is a nice touch.
Posted by Commishbob at 10:28 AM No comments: 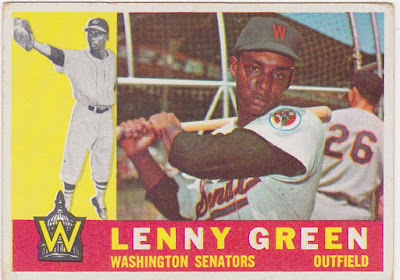 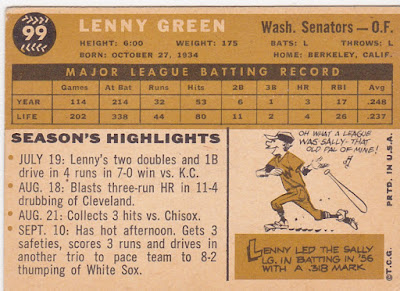 Career: After a few years of honing his skills playing ball against and with many big league stars in the Army, Green played for five clubs over twelve seasons, all in the American League. He was described as a 'steady, graceful, line-drive hitting outfielder.' His last season as a regular on a big league club was with the '65 Red Sox. His best shot at postseason play came in his last season, 1968. He spent a few weeks with the Tigers but was in the minors for most of the season. Detroit went on to win the Series that year. He retired after that and worked for Ford in the Detroit area, his hometown. He passed away earlier in 2019 on his 86th birthday.

In 1960: This was the busiest season yet in his career. Not quite a fulltime outfielder, he was about to take over the centerfield spot when the Nats moved to Minnesota. His .294 batting average was a career high.

Off The Charts: In Washington, during the late 50s, he had a daily sports radio program on WUST. Later in his career, according to SABR 'He was also one of four Twins players named to an in-house committee to study the problem of planning for racially integrated housing arrangements at their Orlando spring training locale.'

The Card: Outside the batting cage shots are nice. That's 1959 Rookie of the Year Bobby Allison in the background.
Posted by Commishbob at 12:15 PM No comments: