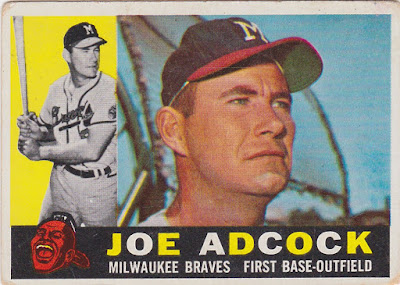 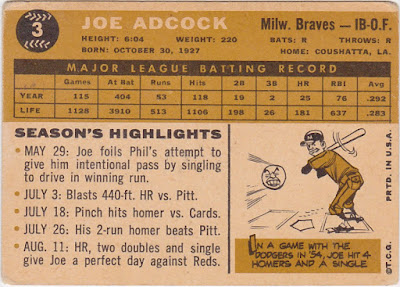 Career: He played 17 seasons beginning in 1950 with the Reds and ending in 1966 with a few AL campaigns with the Angels. He played the bulk of his career with the Braves teams of the 50s including the two World Series clubs of '57/'58/ He got a ring outta that! His power caused folks to overlook his excellent glove work at first base. Finished with 335 homers.

WikiFacts: On July 31, 1954, Adcock accomplished the rare feat of homering four times in a single game, against the Brooklyn Dodgers at Ebbets Field. He also hit a double off the top of the wall to set a record for most total bases in a game (18) that stood for 48 years, until broken by Shawn Green in 2002. -WikiPedia

The Card: I'm always partial to the Braves' of this era if for no other reason than my 'crush' on their unis. I like this cards color combo and the portrait shot of Adcock near the cage. And of course the back is damn near perfect. Huzzah!!
Posted by Commishbob at 8:47 PM 2 comments: