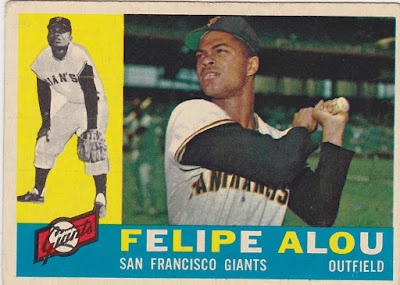 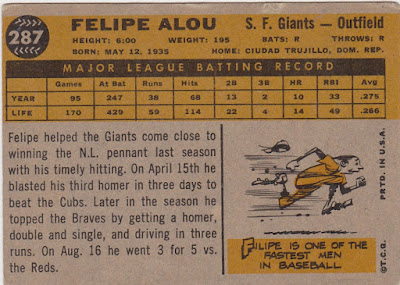 Career: He was the first native of the Dominican Republic to play in the modern big leagues when he debuted with the Giants in 1958. He was followed soon thereafter by many others including his brothers Jose (doh) Jesus and Matty. The three played together in 1963 with the Giants. Felipe worked his way into the Giants' starting lineup over the course of several years and by 1962 he was an All Star.

The Giants stacked plenty of slugging talent in those days and Alou was traded to the Braves in 1964. There he made two more All Star squads and twice led the NL in hits. The went on to play for the Yankees and several other clubs before beginning his second baseball life and a coach and manager, most notably with Montreal.

He had the Expos six games up in the NL East in 1994 at the time of the lockout and missed his shot at managing in the postseason. He did win Manager of the Year.

WikiFacts: Contrary to the popular myth the three Alou brothers never started a game together in 1963. The three all appeared in the same game for the Giants eight times and on three occasions they played the outfield as a unit.

The Card: Classic posed 'action shot' which stands out among the many portraits in this set. I'm guessing that's Wrigley Field. Nice color combo as well. Makes for one of the better cards in the set IMHO.
Posted by Commishbob at 10:44 AM 2 comments: 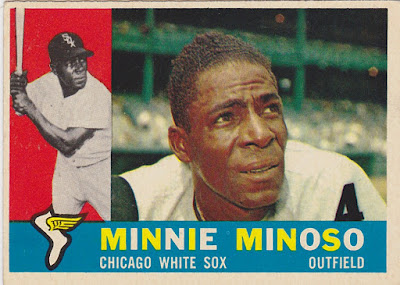 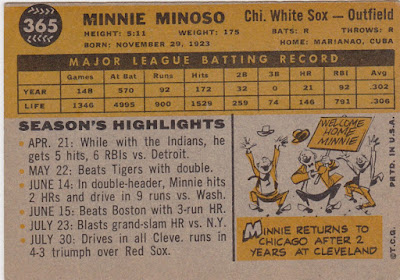 Career: Minoso began his pro career with the New York Cubans of the Negro Leagues in 1946. He finished with a cameo at the age of 77 as a member of the independent St. Paul Saints in 2003. In between he spent 17 seasons in the majors winning three Gold Gloves, being named to 7 All Star squads, finishing second in the 1951 ROY balloting and four times finishing in the top five in MVP votes. He led the A.L. at various times in hits, doubles, triples, hit by pitches (many times) and sac flys.  He was a player/manager in Mexico for quite awhile in the '60s and '70s.

The Card: Looks like Topps tried to replicate the White Sox jerseys by putting their sleeve number over the Chief Wahoo logo on the sleeve. But the Sox wore the number on the other sleeve.  They get points for trying though.