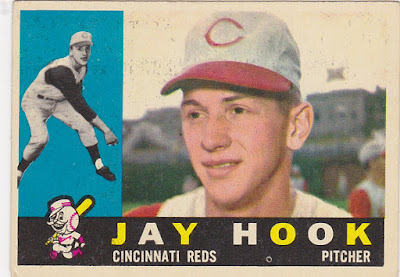 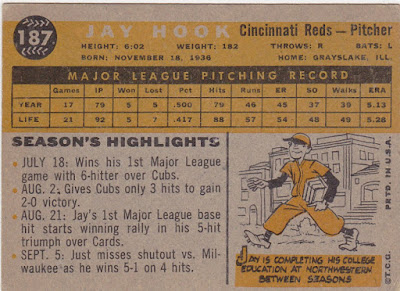 Career: Jay Hook split eight seasons and 160 big league appearances pretty evenly between the Reds (who signed him in 1957) and the Mets (who acquired him in the '61 expansion draft). His 29-62 career mark is pretty much matched by his other numbers, a career 5.39 ERA and 1.43 WHIP.

In 1960: Hook had his best and busiest (in terms of IP) year. He was 11-18 as a regular member of the Reds' rotation. Of his five full or nearly full seasons in the majors this one featured his best ERA and WHIP.

WikiFacts: From Wikipedia.... Hook won the first game in Mets franchise history. On April 23, 1962, he pitched a five-hit 9–1 victory over the Pittsburgh Pirates at Forbes Field, giving his team its first regular-season victory after nine defeats. In that season he compiled an 8–19 mark for the Mets, and led the team in complete games (13) and games started (34)....After receiving a master's degree in thermodynamics, Hook retired in 1964 at age 28 to take a job with Chrysler Corporation.

The Card: Looks like Wrigley Field to me....ivy walls, the roll-up door, the houses across Waveland. Hook was a Chicago native so he probably had family there. The cartoon mentions his attending Northwestern which is just up the Lake Michigan shoreline in Evanston. He was probably 23 in this photo. He looks about 15.

The first Season's Highlight notes his first big league win, a complete game against the Cubs. That came at Wrigley. Topps sure liked to use black elements on the cards of Cincinnati players back then.
Posted by Commishbob at 11:06 AM No comments: