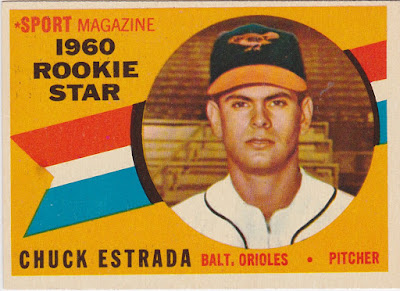 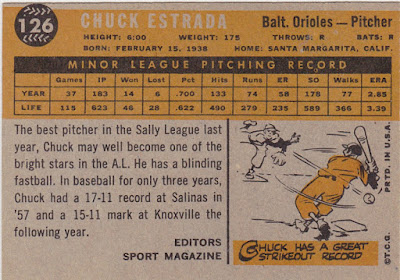 Career: Estrada started off with a bang by winning 33 games in his first two seasons in the majors with the Orioles. He suffered an arm injury in 1962 and his career slid downhill. He went 9-17 for the '62 but his numbers were not all that different from the previous two years. From there he hung on for a couple more years with the Orioles and ended his active days with stints with the Cubs and Mets. He worked as a pitching coach for several organizations after that.

In 1960: Estrada finished second to teammate Ronnie Hansen in the Rookie of the Year balloting. He made the All Star team

WikiFacts: In that 1960 All Star Game Estrada pitched one eventful inning. After getting two outs he gave up four straight hits and a run before fanning Bob Friend to stop the bleeding. Ernie Banks, Joe Adcock, Bill Mazeroski and Del Crandell were the guys who got the hits.

The Card: The cartoon makes note of his great minor league strike out prowess. He was pretty good at issuing walks as well. The write-up turned out to be correct. For awhile he WAS a bright A.L. star.

Awesome orange rookie card. I love these almost as much as the managers subset.

Posted by Commishbob at 2:27 PM No comments: 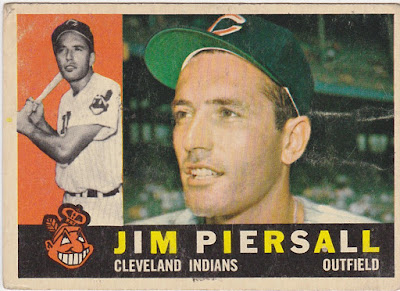 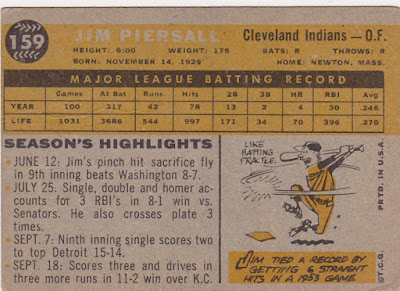 Career: Piersall was a multi-talented player whose eccentricities overshadowed his ball skills. He played for 17 seasons, all but 40 games in the American League with the Red Sox, Senators, Angels and Indians. He was one third of a talented Red Sox outfield in the 50's playing between Ted Williams and Jackie Jensen. For his career he had a .272 average with some power and speed. He several times ranked among the best defensive outfielders when you look at the advanced stats. He won a couple of Gold Gloves and was twice an All Star.

WikiFacts: "Jimmy Piersall was a gifted, high-visibility player who had a long career in the major leagues; a minor star who intrigued and enchanted both fans baseball people with his natural, all-around athleticism, and sometimes erratic behavior. He was good hitter and excellent fielder with a strong arm and above-average speed; he was one of the few American athletes whose battle with mental health issues was well documented in the 1950s. With that, he eventually figured out that those past issues would allow him the freedom to sometimes act eccentric and zany -- which further endeared him to fans." -Piersall's BR Bullpen bio

"Fear Strikes Out is the title of the autobiography of major league outfielder Jim Piersall, written in collaboration with Al Hirshberg and originally published in 1955. The book broke taboos by openly speaking of Piersall's bout with mental illness and depression and became a best-seller. A film of the book was released in 1957 and stars Anthony Perkins and Karl Malden." -Wikipedia

"Tony Perkins is one of the worst actors in the history of American film." -Me

The Card: This off-center copy suits me just fine. Nice color combo, Piersall is wearing his cap (too many capless guys in this set) and he's at Yankee Municipal Stadium. The dark gray cardboard detracts from the back though. It makes the make pretty hard to read. Too bad Topps couldn't have used the cream color backs through the entire set. But that wouldn't have been very Topps-like. Inconsistency is their most consistent attribute in this era's offerings. 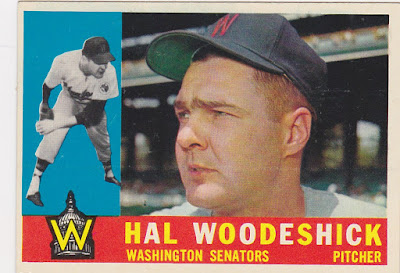 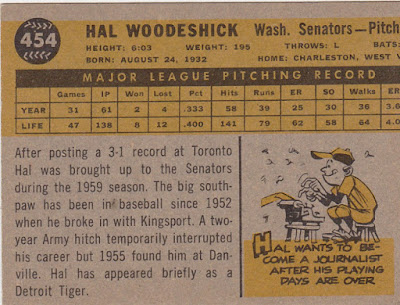 Career: Woodeshick pitched for six different teams over his eleven years in the majors, most of his time came with the Houston Colt 45s/Astros. Although he made 62 starts among his 400+ appearances his most effective work was as a reliever. From 1963 thru 1965 he had over 50 saves in a time that saves were less common than they are now. He was an All Star in '63 and led the NL in saves the following season.

In 1960: He opened the season in the Senators' rotation but after 14 starts and a rough July he went to the bullpen where he was noting if not erratic. He ended the year with a 4-5 record and four saves.

WikiFacts: "He made his last [career] appearance in Game Six of the 1967 World Series against the Boston Red Sox, working a scoreless eighth inning in an 8-4 Boston victory in which he was the Series' record-tying eighth pitcher used in the game by the Cardinals. He was released a week after the Cardinals won the World Series title in seven games." -BR Bullpen page

The Card: This one sports one of the better color combos in the set. And that's the old Comiskey Yankee Stadium.

The cartoon states that Woodeshick intended to work as a journalist after his baseball career but by all accounts that didn't happen. He lived in Houston and was active with the team's alumni and did a lot of local charity work in hospitals. 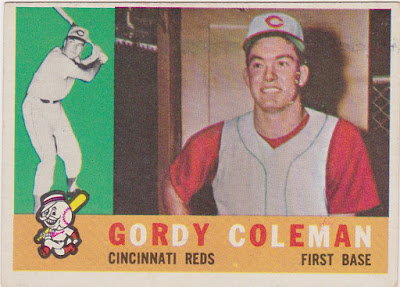 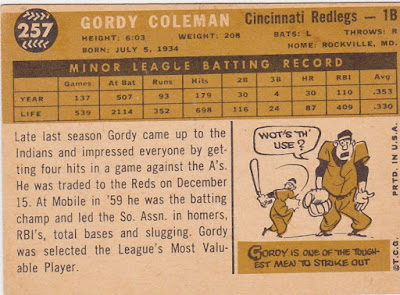 Career: Coleman put up some serious numbers as he rose through the Cleveland system but his path to the majors was blocked by Vic Power. After a brief debut with the Indians in 1959 he was dealt to the Reds and played until early 1967 with them. He hit .273 with just under a hundred homers. He was a valuable contributor to some good Reds clubs. He had five hits and a homer in the 1961 World Series.

In 1960: He was called up in late July and given the starting first basemans job. Frank Robinson moved permanently to the outfield while Gus Bell and Wally Post went from starters to platooning as the third outfielder. Coleman hit .271 with six homers in a bit less than half a season.

WikiFacts: While playing in the Southern Association in 1959, outfielder Gordy Coleman hit .353 with 30 homers and 110 RBI to win the league's Triple Crown. After his career, he became a Cincinnati Reds broadcaster and is a member of the Reds Hall of Fame. -Coleman's BR Bullpen page.

The Card: Open door, chain link fencing. That had to be a minor league clubhouse photo. Coleman is airbrushed into a Reds' uni here.

Posted by Commishbob at 9:29 AM No comments: 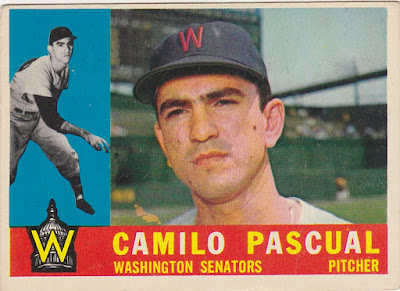 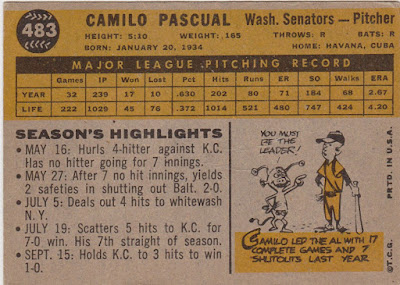 Career: Pascual spent nearly all 18 big league seasons with the Senators/Twins franchise. He went 174-170 while spending a good portion of his time on some wretched Senators clubs. He won 100 of those games in a stretch from 1959 thru 1964. He made the All Star team in all but one of those season.

WikiFacts: In late December 1959, it was widely published that Senators owner Calvin Griffith “had looked one million dollars in the eye and expressed no interest.” It was an offer not for his Washington franchise but merely for two of his ballplayers, first baseman Harmon Killebrew and pitcher Camilo Pascual.. One of those published reports further explained the matter as follows: “The bidder was Gabe Paul, vice president of the Cincinnati Reds. ‘I offered Griffith $500,000 each for Killebrew and Pascual and it was a firm offer,’ Paul said. ‘I consider Pascual the best pitcher in the majors.’” -SABR bio of Camilo Pascual

"He'd come straight over the top with it and it would just dive off the table. The spin was so tight, you couldn't identify the pitch until it was too late. It didn't flutter, it didn't hang, it just kept biting. When Pascual was right, nobody had a chance. That curve was unhittable." -Tony Kubek

[Mickey] Mantle ...smacked plenty of long bombs off Pascual, whom he took deep 11 times in total, ...... "I hit those off Camilo Pascual, one hell of a pitcher." -Mickey Mantle quote via SABR

The Card: Pascual has an error free card! That's significant because in 1959 Topps butchered his first name on the front of his card and his last name on the back. And they stuck his face on Ralph Lumenti's card, just for more fun.
Posted by Commishbob at 12:17 AM No comments: