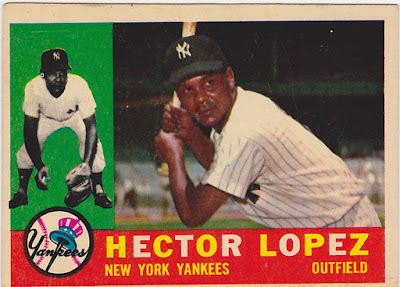 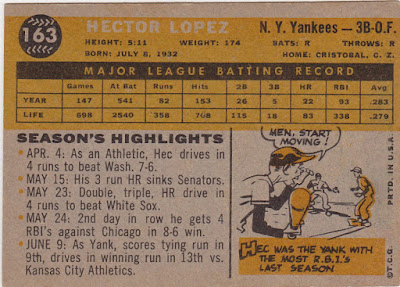 Career: He had a solid if unspectacular 12-year career for the A's and Yankees. After playing primarily as an infielder with Kansas City he became almost exclusively an outfielder in New York.

In 1960: Lopez was coming off his career year. He came over to the Yankees in late May of 1959. And while his '60 numbers were down in the power categories he was in the first of five seasons that saw him playing in the World Series.

WikiFacts: In the 1960 World Series against the Reds Lopez took over for Mickey Mantle when the Yankees star got hurt in Game Four and got the Game Five start. He had a huge day in that clincher getting five RBIs with a triple, homer and sac bunt.

The Card: It's well off-center obviously. But the Season's Highlight box makes any card better. That cartoon is deceiving. He had 69 RBIs with the Yankees in 1959 which trailed Mickey Mantle (75) and Elston Howard (73) and equaled Yogi Berra. He had 93 when you include the 24 he had with the A's.

Posted by Commishbob at 9:22 AM No comments: