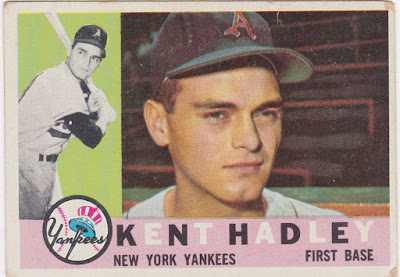 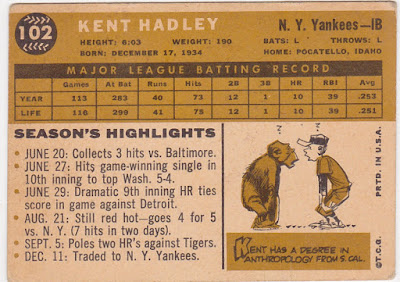 Career: Hadley was originally signed by the Tigers and was dealt to Kansas City in 1957. In 1959 he was the Athletics primary first baseman and hit .253 with 11 homers. He was then traded to the Yankees in the deal that brought Roger Maris to the Bronx. Hadley spent a season in NY, a year in the White Sox chain and then headed to Japan to continue his career.

He played for six seasons for the Nankai Hawks and was a well respected player, the first American to be voted into a Japanese League All Star Game.

In 1960: He spent all but the final month of the season with the Yanks and played in 55 games, mostly as a pinch hitter and late-inning replacement at first base. He hit .203 with 4 homers. He was sent to the minors late in August when Casey Stengel decided he wanted a veteran bat off the bench (Dale Long of the Giants) and was not with the club for the Series that season.

Off The Charts: Wikipedia sez...Hadley became the first foreigner to homer in his first at-bat in Japan. For the Nankai Hawks, Kent went deep off of Junichi Nakajima on May 1, 1962, in Heiwadai Stadium.

The Card: He's pitched as an Athletic since Topps didn't have time to scrub his logos. They did add the traded line to his highlights and there's that terrific cartoon
Posted by Commishbob at 12:45 AM