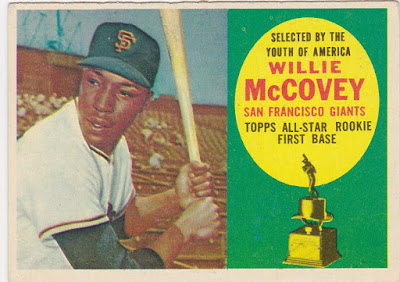 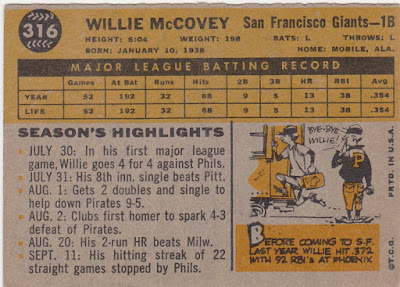 Career:  Notable Achievements (from Baseball Reference)
In 1960: Coming off his R-O-Y '59 season Stretch slipped significantly at the plate. His .238 average was nearly 120 points below his rookie number. His slugging and OPS numbers were down by similar percents. It took a couple of seasons for him to return to the level he reached in his first season.

WikiFacts: "In 1963, McCovey won the first of three NL home run crowns, knocking 44 – the number he wore on his jersey – over the fence. He would belt 521 long balls for his career, and chalk up 18 grand slams, at the time second only to Lou Gehrig’s 23. In 1962, the Giants returned to New York to take on the Yankees in a thrilling, seven-game World Series. With the Giants trailing 1-0 in Game 7, McCovey was at bat with two outs in the bottom of the ninth, and runners on second and third. McCovey slashed what looked like a Series-winning hit to the left of Yankee second baseman Bobby Richardson but he caught the ball. The moment was so stunning it was immortalized in a “Peanuts” comic strip by Charles Schulz."  From his page on the Hall of Fame site.

The Card: McCovey looks painted/airbrushed/retouched on this, his rookie card. And I'm not certain where the photo was taken. The red seats usually indicate Connie Mack but it doesn't look like it otherwise. It looks like Seals Stadium and maybe it is with the seats retouched to match the railings or something.
This is one of two key rookies in the 1960 set, the other being that of Carl Yastrzemski. As the card back alludes to McCovey packed a lot of highlights in what essentially was a half season of game during his rookie year. 4 for 4 in his first game....not a bad way to kick off a career!

Posted by Commishbob at 9:09 AM