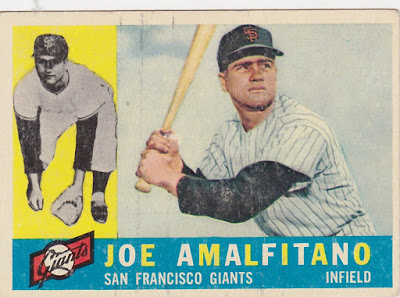 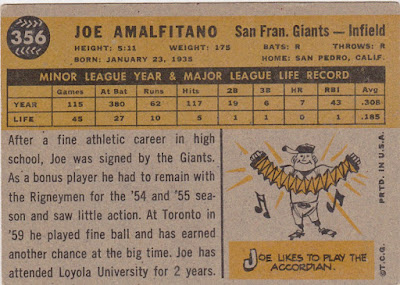 Career: He's a baseball lifer. He began with a "Bonus Baby" signing in 1954 and he remains in the game to this day. Remarkably he's never been employed by an American League club. He played for ten seasons with the Giants, Colt .45s and Cubs. He managed the Cubs and spent many years in coaching, scouting and front office assignments for a variety of teams. He coached third base for over a decade for Tommy Lasorda in Los Angeles. According to the Giants' website he is currently a special assistant for player development, primarily working in their farm system.

In 1960: He had his highest career batting average (.277) to go along with a couple of homers and 27 RBI. After his mandatory two years on the Giants' roster as a Bonus baby and a stint in the minors this was his first full season as a major league regular.

WikiFacts: Fun blog interview with Amalfitano can be found here. Here is the opening quote from Amalfitano:


“So, we had a team meeting the night before the (1954 World Series) and Durocher started reading from this scouting report and going through their lineup. After about the third name, he stopped and said, ‘We beat these guys in the spring and we’ll beat them again’ and that was the end of the meeting. He took that scouting report and threw it in the trash.”

Lasorda has a blog post about his pal Amalfitano which is found here.

The Card: That has to be a minor league shot of Amalfitano on the card. They airbrushed a Giants 'SF' logo on the cap but left the pinstripes. This is one of the lesser conditioned ones in my binder. the front is lined and scuffed. Candidate for an upgrade one of these days.

The write-up refers to Amalfitano's first tenure the Giants as his 'time with the 'Rigneymen'' as in current (at the time of the card) Giants manager Bill Rigney. But the manager in '54/'55 was Leo Durocher. I see where they were going with that but it seems odd.

You have to love a cartoon that mentions a player's musical skills.

Posted by Commishbob at 8:58 AM