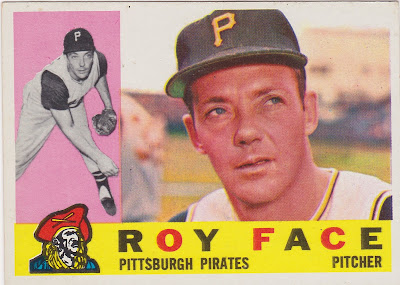 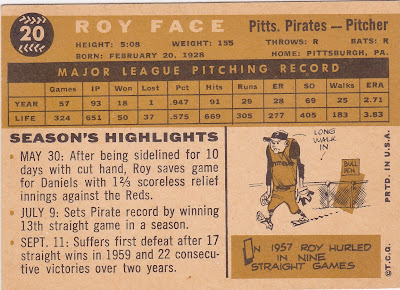 Career: After an impressive four season minor league stint he debuted in 1953 and was hit pretty hard. After a year back in the minors he returned in 1955. He transitioned into a relief specialist and became one of the best over the next decade and a half. He was a three-time All-Star and led the NL in saves three times.

In 1960: He was coming off a sterling '59 season which saw him go 18-1(!) out of the Bucs' bullpen. In 1960 he had 24 saves and a WHIP of 1.06 as the Pirates won the NL pennant and defeated the Yankees in that memorable World Series. Law had three saves in that October classic.

WikiFacts: "He achieved his success almost exclusively with the forkball, which he had learned from Yankees reliever Joe Page."

The Card: As a kid, impressed by numbers on the back of baseball cards, I was in awe of Roy Face's 18 win season in 1959. So while I don't collect Face at all I do appreciate his cards. This one, with its pink element, is no exception. BTW.....Roy is giving someone a righteous side-eye, yes?
Posted by Commishbob at 11:49 AM