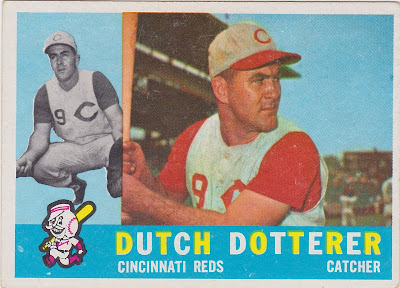 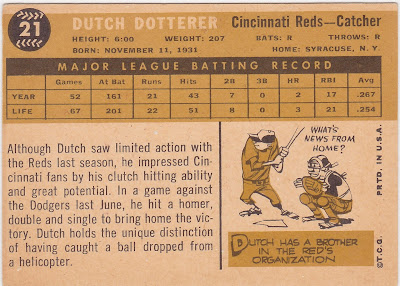 Career: Dutch had a long climb through the Reds organization that included a two-year detour for military service. He had a couple of brief stretches with the big club in '57-'58 and settled in as the backup in 1959. That was the only year he was in the majors wire-to-wire. He was traded to the Athletics after the 1960 season but was taken by the Senators in the Expansion Draft a few months later. He got into a few games for the Nats in '61 before he finished his playing days in AAA in 1962.

In 1960: His game logs show he opened the season in a platoon with Ed Bailey but was hitting .228 when he was sent back to the minors in July. His numbers in AAA for the rest of that season were pretty good and probably are what sparked the senators to pick him in the draft.

WikiFacts: Apparently Dutch was something of a Renaissance man!  And his family had some serious athletic skills...this is from his Wikipedia page:


His father, Dutch Dotterer, Sr., was a longtime scout with Cincinnati, the Cleveland Indians, and New York Yankees. His brother, Tom, an infielder, played minor league baseball in the Cincinnati organization.

Also, his son, Mike, graduated from Stanford University, where he is a member of the Stanford Athletic Hall of Fame in both football and baseball. Mike was drafted by the New York Yankees (1979, 1983), the Oakland Athletics (1982) and in the NFL by the Los Angeles Raiders (1983), where he was a member of the 1984 Super Bowl Championship Team.


The back of the card mentions that he once caught a ball dropped from a helicopter. His page from the Syracuse Sports Hall of Fame mentions it as well. Not much about it online but this site quotes a book entitled Redleg Journal:

(Reds General Manager) “Gabe Paul offered $25 to each Reds and Giants catcher who would attempt to catch the balls dropped from the helicopter; and an additional $100 for each ball caught. Only Landrith and Dotterer–a Reds farm hand on leave from the Navy–volunteered.

The Card: Nothing extra special about this one but it bears mentioning that his 1959 card is awesome. And his 1961 card actually has a photo of his brother.
Posted by Commishbob at 11:15 AM