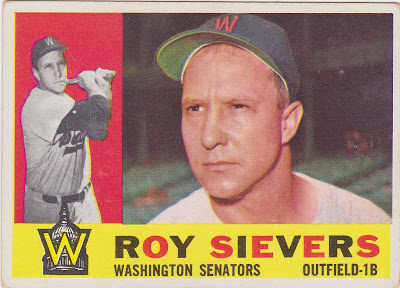 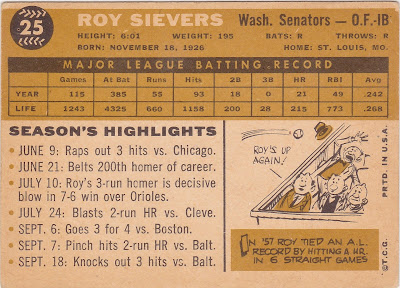 Career: Sievers was the 1949 AL ROY and went on to an excellent career that spanned 17 years and five clubs. His best seasons came in athe mid-50s to early 60s run with the Senators and White Sox where he made four All-Star squads and three times finished in the Top 10 of MVP voting. His Baseball Reference Similarity Scores list him with hitters like Edwin Encarnacion, Boog Powell, Rocky Colavito, and Greg Luzinski...good hitters probably a notch or so below Hall of Fame levels.

In 1960: Sievers was traded to the White Sox on April 4 for Earl Battey and Don Mincher,  went on to contribute to the Twins rise to title contenders in the mid-60s.  He took over at first base for the aging Earl Torgeson and had another fine season. He had 28 homers, 91 RBIs to go along with a .295 average and  .930 OPS.

Off The Charts: Roy Sievers died in 2017 at the age of 90. There is a very nice obit/tribute that can be found here.


Sievers appeared as the swinging double for actor Tab Hunter in distance shots in the 1958 movie Damn Yankees. Hunter's character, Joe Hardy, was left-handed, so the right-handed Sievers was outfitted with a mirror-image Nats uniform and the film was reversed in production.


The Card: Obviously this is a first series card and the trade to the Sox was done after it was on store shelves so he's a Nat here. The yellow/red/black combo is one of them more attractive ones Topps used.
Posted by Commishbob at 1:17 PM