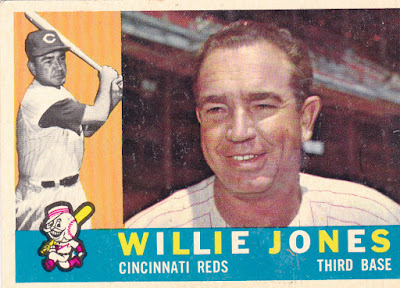 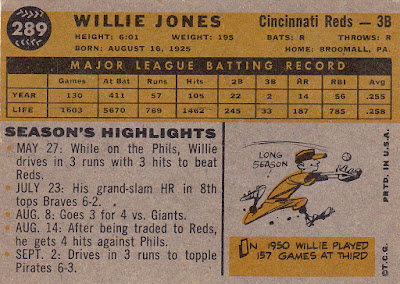 Willie Jones   Cincinnati Reds
Career: After serving in the US Navy during WWII, Willie Jones signed on with the Phillies in 1947. By '49 he was their starting third baseman. He had a hand in the Phils Whiz Kids era run in the early 50s and made a few NL All-Star squads. He was known for his fielding skills but he held his own at the plate for the most part.
In the 1950 World Series against the Yanks Jones went 4 for 14 (.286) including a double. After his decade+ in Philly, Jones went on to play for the Indians and Reds. He retired after playing a few games during the '61 season and died at 58 from cancer.
From Wikipedia...Jones was the top fielding third baseman in the National League during the 1950s. He led the league in fielding percentage five times, in putouts for seven years (also tying a record), and twice in assists and double plays.
According to his SABR bio...Hall of Fame pitcher Robin Roberts rated his Phillies teammate as the second-best third basement he ever saw, behind Brooks Robinson.
In 1960:  Jones his .268 in part-time duty as a pinch-hitter and occasional starter for the Reds.
Off The Charts: From a blog entitled "Stuff Nobody Cares About" we get this...."So just how did “Puddin’ Head” get his unique nickname? He received it as a child after a song that was popular in the 1930s called Wooden Head, Puddin’ Head Jones."
The Card: Red seats and red pinstripes means this is Connie Mack Stadium.
Posted by Commishbob at 10:03 AM