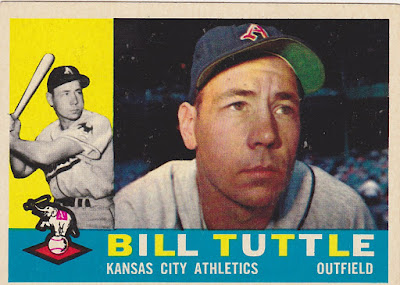 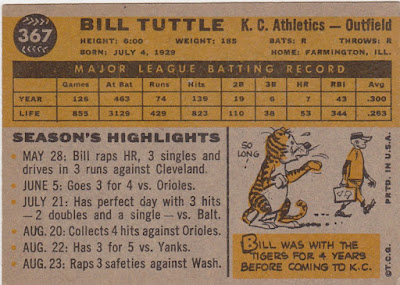 Career: Bill Tuttle played for 11 seasons as an American League outfielder, eight as a starter. He played primarily for the The Tigers and A's before ending his major league career with the Twins in 1963. Following that he continued to play minor league ball for another four seasons.

He was never an All Star but he was among the best fielding center-fielders of his day. At that position he led the AL in assists five times and in putouts twice. He compiled a career average of .259 with a handful of homers.

In 1960: He was coming off his only .300 season but dropped back into more familiar hitting territory with a .256 average and 8 homers. He led the league's outfielders in assists, putouts and double plays.

WikiFacts: On practically every baseball card issued for Tuttle, a large bulge of chewing tobacco is evident in his cheek. Tuttle died in Anoka, Minnesota at the age of 69, and oral cancer was in all likelihood the cause of his death. Bill was diagnosed with oral cancer five years before his death, and he put the last half-decade of his life to use in raising awareness, as an active volunteer for the National Spit Tobacco Education Program (NSTEP) of Oral Health America. -Wikipedia

The Card: The good: Love the crying Tiger cartoon. The bad: three of his six 'seasons highlights' came against the Orioles.

Tuttle may or may not have that chaw going in his color shot on this card but it's defiantly there in his b/w 'action pic.
Posted by Commishbob at 9:13 PM