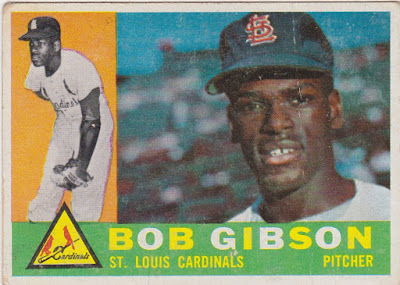 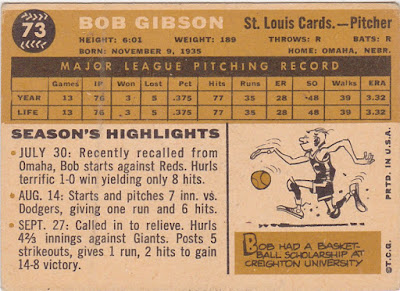 Career: Simply put Hall of Famer Bob Gibson is among the greatest ever to take the mound. His 1968 season may be the most dominant one ever turned in by a pitcher is baseball history, at least modern history.

In 1960: He split the season between Rochester and the Cards. Still learning his craft he went 3-6 with an ERA over 5 while making 12 starts and appearing in 27 games overall. A year later he would start to resemble the real Bob Gibson.

WikiFacts: Personal note reprinted from my '59 Topps blog: I was fortunate enough to see Gibson pitch and believe me, he was a real badass on the mound. My favorite memory comes, ironically, from 1975, his last season and the final time I saw him perform. I attended this game in mid-August with a friend of mine who happens to be a lifelong Cardinal fan. As Gibby's career came to an end he struggled through a year that saw him saddled with a 3-10 record and an ERA over five. But on this day Gibson came into the game after the Cards had taken a one run lead in the top of the eleventh. I distinctly recall watching from seats behind the Cardinal dugout as he stalked out to the mound with that look that few pitchers had. My friend and I both saw it and said to one another 'Game over." And it was. Gibby blew away three Astros (looking!!) to wrap up the game.

The Card: It's creased and the corners are worn down but that's fine by me. I could have held out for a better copy but maybe vintage Gibson cards in my collection are supposed to be "well loved"! My 1959 Gibby is the only card to have survived my childhood. Maybe that's why he's special to me. 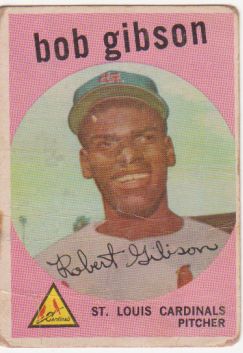