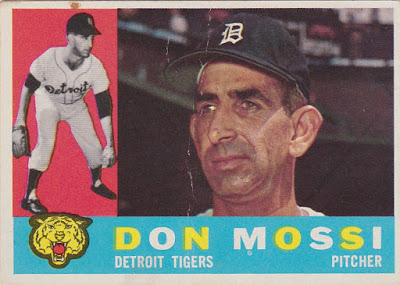 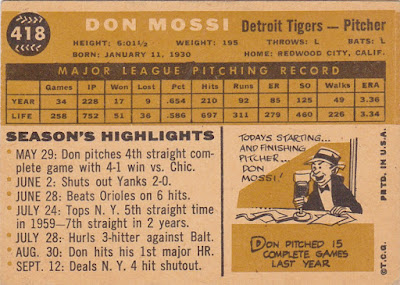 Career: Mossi pitched 12 seasons, all in the A.L. He bracketed a run with the Tigers as a starter with stints with the Indians, White Sox and A's for whom he was mostly a reliever. He had 17 and 15 win seasons for Detroit and won 101 games overall.

WikiFacts: "...By [1960], Don had appeared on enough bubble gum cards to have caught the attention of millions of young fans, who marveled at his unusual visage. He did not have the classic country boy good looks of a Mickey Mantle or the dark, handsome face of a Sandy Koufax. Don was, well, different. He had a long, slightly crooked nose, his eyes were close together, and his ears stuck out to the edges of the cardboard. Indeed, some of his teammates called him “Ears.” Others nicknamed him “The Sphinx.” -from Jockbio.com

Later, when these young fans grew up, they were less diplomatic. One said Don looked like “Mount Rushmore on a rainy day.” Bill James wrote that Don was the “...complete ugly player. He could run ugly, hit ugly, throw ugly, field ugly and ugly for power. He was ugly to all fields.”

The Card: The crease isn't as obvious in hand or in the binder as it is in the scan. But nonetheless I'll nab a better copy of this one at some point. After all, it's Don Mossi! If you have a joke about the crease and those on Mossi's face kindly add it to the comments.

Ugliest card ever? I dunno, you be the judge.

Note that one of his 'Season Highlights' is beating the Yankees for the fifth straight time. He had more wins (and losses) against the Yanks than any other team. He went 19-16 in his career versus them.
Posted by Commishbob at 7:30 AM