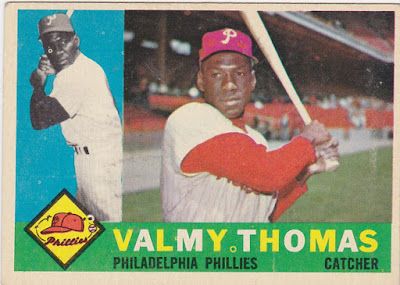 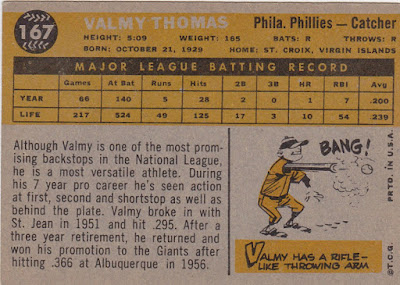 Career: Culled from my post on his '59 card: Thomas played in Canada and across the Caribbean between the late 40's and 1951 when he played for the Pirates minor league club north of the border. A pay cut prompted him to 'retire' and he starred in the Dominican Republic for several seasons. SABR has a cool story of his years there online.

He emerged as a Giants farmhand in 1956 after a year back in Canada for the Pirate chain. He debuted in 1957 for the Giants in New York. He travel to the West Coast when the Giants moved and played for the Phillies, Orioles and Indians in the three subsequent years. By doing do he became one of two players to play in five cities in five seasons. Dave Rader being the other*.

In 1960: Valmy played for the Orioles in 1960 after being purchased from the Phils' organization in May. He got into seven games before being sent to the minors and was back up for a September look. In all he had a hit in 16 at bats.


After his playing days he was a successful businessman and public servant in his native Virgin Islands. He passed away in 2010 and was honored by the Congressional Delegate from his homeland. Here is another article which highlights his life and career.

One odd note.... Thomas was shot and nearly killed by another ballplayer in a dispute over a woman in 1962. The link goes to a Sarasota Herald story that's a real eye opener, in several ways.

The Card: I wish I had been able to see a game at Connie Mack Stadium. It looks so colorful. I never talk much about 'poses' but Thomas is in that fake 'swing follow through' pose that you see on a bunch of vintage cards. Who looks like that at the plate? It just looks awkward. But besides all that it's worth noting that he got a cool cartoon while not having enough good things happening in 1959 to merit a 'season's highlights' back.

If you count the abundance of red on this card Valmy has a six color scheme going...blue, green, yellow, white, black and red.

*=Tip of the cap to reader Paul for pointing that out to me on the '59 blog.
Posted by Commishbob at 7:21 AM