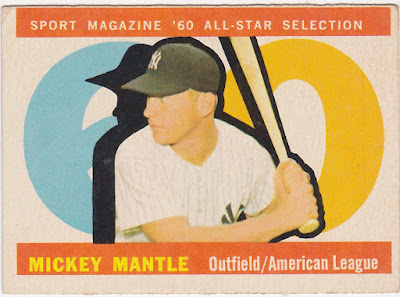 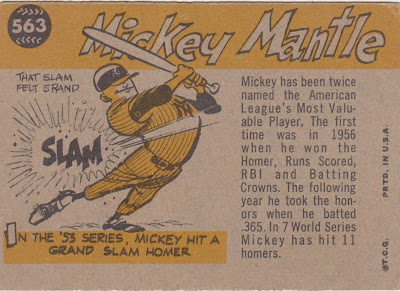 As an All Star: The Mick played in 16 ASGs but hit only .233 going 10 for 45 with 17 whiffs. His brightest ASG moment came in the top of the first in the '55 game in Milwaukee when he smacked a three run homer in the top of the first. That staked Billy Pierce and the AL to a lead that Whitey Ford would blow in the 7th and 8th. The NL won 6-5 on Stan Musial's lead-off dinger in the bottom of the 12th.. His other AGS homer came the next year in Washington when he followed Ted Williams' homer off Warren Spahn with one of his own.

In the 1960 ASGs: He started in center in both games that year. In Kansas City he walked twice than gave way to Al Kaline. In Yankee Stadium a couple of days later he singled in four trips to the plate.

The Card: This one came to me in a screw-down holder and it looked great if you can forgive the off centeredness. Scanning reveals a few flaws. Both the bottom and the top edges are rough and the corners are softer than they appeared in the case. Still its a pretty nice card for the price I paid.

The All Star subset is growing on me. It'll never replace the '58 as my favorite but it has a pretty cool design.