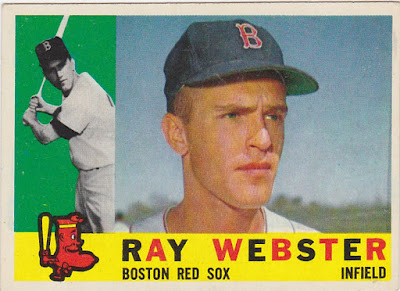 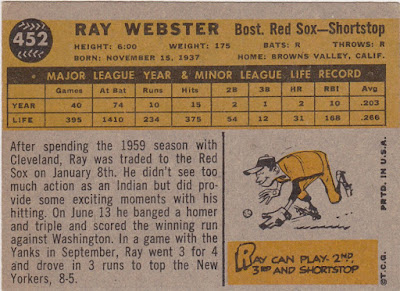 Career: He played in forty games for the Indians spelling Billy Martin in 1959 and then was dealt to the Red Sox before the 1960 season. He spent about eight seasons in the minors bracketing his brief majors league days. He hit .195 over 77 big league at bats and entered the insurance business in California after his baseball career.

In 1960: Webster saw action very sparingly in the first six weeks of the season getting five at bats over seven games. By mid-May he was back in the minors playing for Montreal and Indianapolis, the AAA affiliates of the Dodgers and Phils respectively.

WikiFacts: From his BR Bullpen page: "Ray recalled his two biggest career highlights. "My first big league hit was a home run off Billy Loes of the Orioles as a pinch hitter for Billy Martin. My other greatest thrill was playing on the same field with Ted Williams in Boston."

The Card: Looks more like a '60 spring training shot than a retouched photo with a cap re-do. Over all nothing special with this one.